San Clemente ( Spanish for "St. Clement") is a coastal city in Orange County, California, United States. The population was 63,522 in at the 2010 census. Located on the California Coast, midway between Los Angeles and San Diego, the southernmost city of Orange County is known for its ocean, hill, and mountain views, a pleasant climate and its Spanish colonial-style architecture. San Clemente's city slogan is "Spanish Village by the Sea". The official city flower is the bougainvillea, and the official city tree is the coral. San Clemente is also the southernmost city in the Los Angeles metropolitan area. 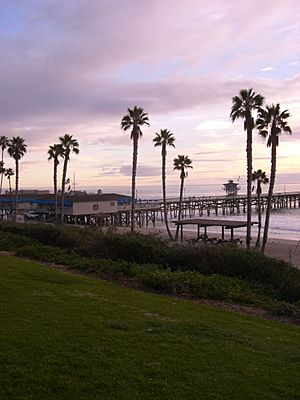 The pier in San Clemente at the end of Avenida Del Mar, part of the original village created by Ole Hanson 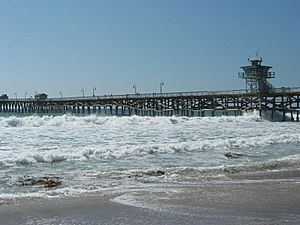 Another view of the San Clemente pier 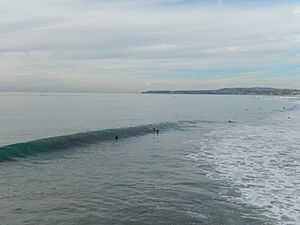 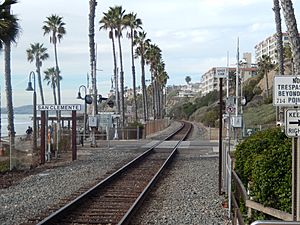 Amtrak passes along the beach at San Clemente

Prior to colonization by Spaniards, the area was inhabited by the Juaneño native people. Long admired by explorers and passing settlers, it remained virtually uninhabited until 1776, when Mission San Juan Capistrano was established by Father Junipero Serra, which led both Indians and Spanish settlers to establish villages nearby. After the founding of Mission San Juan Capistrano, the local natives were conscripted to work for the mission.

Property rights to the land exchanged hands several times, but few ventured to build on it until 1925, when former Mayor of Seattle, Ole Hanson, an out-of-town, major land developer, with the financial help of a syndicate headed by Hamilton Cotton, purchased and designed a 2,000-acre (8.1 km2) community. Hanson believed the area's pleasant climate, beautiful beaches, and fertile soil would serve as a haven to Californians tired of "the big city." He named the city after San Clemente Island, which in turn was named by the explorer Vizcaino in 1602 after Saint Clement, whose feast day occurs on November 23, the day of Vizcaino's arrival on the island. Hanson envisioned it as a Mediterranean-style coastal resort town, his "San Clemente by the Sea." He had a clause added to the deeds requiring all building plans to be submitted to an architectural review board in an effort to ensure that future development would retain red tile roofs and white exteriors. But this proved to be short-lived; in the oldest parts of town you find an eclectic mix of building styles.

Hanson succeeded in promoting the new area and selling property. He built public structures such as the Beach Club, the Community Center, the pier and San Clemente Plaza, now known as Max Berg Plaza Park, which were later donated to the city. The area was officially incorporated as a City on February 27, 1928 with a council-manager government.

Referring to the way he would develop the city, Hanson proclaimed, "I have a clean canvas and I am determined to paint a clean picture. Think of it--a canvas five miles (8 km) long and one and one-half miles wide! ... My San Clemente by the Sea."

Soon after San Clemente was incorporated, the need for a "Fire House" was realized. The headlines in San Clemente’s first newspaper, El Heraldo de San Clemente June 1928 read: "Building to house local fire department will be constructed by popular subscription and turned over to the city when completed!" Individual subscriptions were received in the amounts from $6.00 to $1500.00 from the citizenry.

In 1969, President Richard Nixon bought part of the H. H. Cotton estate, one of the original homes built by one of Hanson's partners. Nixon called it "La Casa Pacifica," but it was nicknamed the "Western White House," a term for a President's vacation home. It sits above one of the West Coast's premier surfing spots, Trestles, and just north of historic surfing beach San Onofre. During Nixon's tenure it was visited by many world leaders, including Soviet Premier Leonid Brezhnev, Mexican President Gustavo Díaz Ordaz, Prime Minister of Japan Eisaku Sato, and Henry Kissinger, as well as businessman Bebe Rebozo. Following his resignation, Nixon retired to San Clemente to write his memoirs. He sold the home in 1980 and moved to New York City, later to Saddle River, New Jersey, and then eventually to Park Ridge, New Jersey. The property also has historical ties to the Democratic side of the aisle; prior to Nixon's tenure at the estate, H.H. Cotton was known to host Franklin D. Roosevelt, who would visit to play cards in a small outbuilding overlooking the Pacific Ocean. The Old City Plaza also at one time had a small Nixon museum when the city occupied the premises. 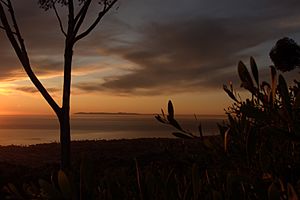 A view of Santa Catalina Island, California from San Clemente. The city is known for its mild weather and mediterranean climate

Interstate 5 runs through San Clemente. The Foothill Transportation Corridor has proposed to connect Mission Viejo to the Orange/San Diego county line, running along the east side of San Clemente and through San Onofre State Beach on its way to I-5. The California Coastal Commission rejected this proposal 8–2. Reasons cited for rejection included: the road's alignment through a state park, endangered species habitat, and a Native American archaeological site, and the runoff from the road damaging the state park and surf break. The Federal Government rejected the proposal to place the toll road in accordance with the TCA proposal. This decision was viewed as a major defeat for the TCA and great victory for The Surfrider Foundation (which is based in San Clemente), and for assorted environmental groups.

At the south end of town is located Camp Pendleton and Trestles surf beach. Additionally, the city is served by trains by Amtrak and Metrolink between Los Angeles and San Diego, and which provide beachside service in San Clemente. 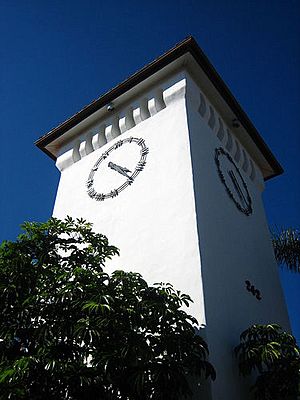 According to the 2010 United States Census, San Clemente had a median household income of $87,184, with 7.9% of the population living below the federal poverty line.

As of the city's 2010 census, there were 68,763 people and 25,514 housing units in the city. Ninety percent of the adult population is a high school grad or higher, and 5.5% of the population are considered below the poverty line. 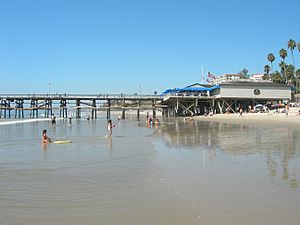 A view of the pier in San Clemente, a popular surfing spot in the city

San Clemente is the surfing media capital of the world as well as a major surfing destination. It is home to Surfing Magazine, The Surfer's Journal, and Longboard Magazine, with Surfer Magazine an adjacent city San Juan Capistrano.

The city has a large concentration of surfboard shapers and manufacturers. Additionally, numerous world-renowned surfers were raised in San Clemente or took up long-term residence in town, including Shane Beschen, Mike Parsons (originally from Laguna Beach).

San Clemente High School has won 6 out of 7 most recent NSSA national surfing titles (the 7th title was won by Capistrano Connections Academy).

San Clemente is twinned with: 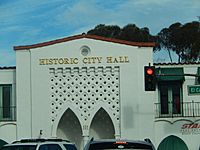 Built in 1929, the Historic City Hall at 101 South El Camino Real in San Clemente, also known as the Easley Building, has never been used as a domicile for municipal government. It used to be a bank and the office of the city clerk. In 2011, it was listed for sale for $4 million. The 9,845-square-foot structure, built in Spanish Colonial Revival architecture, is listed on the National Register of Historic Places.

The following companies have their corporate headquarters in San Clemente:

According to the city's 2020 Comprehensive Annual Financial Report, the largest employers in the city are:

Many people also work as civilian employees at the USMC Base Camp Pendelton which is just over the San Diego County line.

The city is served by Capistrano Unified School District.

San Clemente High School has an IB (International Baccalaureate) Program and a large number of AP (advanced placement) courses. Students at San Clemente High School have received academic accolades and hosted groups ranging from national title winning dance teams to award-winning orchestras, bands, voice groups and one of the nation's most skilled athletic programs; these groups have also received opportunities to perform at various venues including Carnegie Hall (madrigals and orchestra), various venues in Hawaii (marching band), and many others.

All content from Kiddle encyclopedia articles (including the article images and facts) can be freely used under Attribution-ShareAlike license, unless stated otherwise. Cite this article:
San Clemente, California Facts for Kids. Kiddle Encyclopedia.