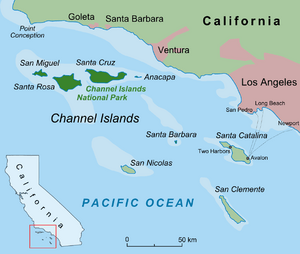 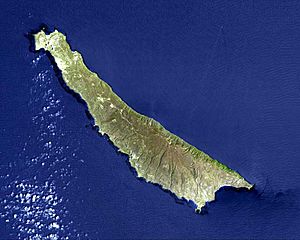 San Clemente Island (SCI) is the southernmost of the Channel Islands of California. It is owned and operated by the United States Navy, and is a part of Los Angeles County. Defined by the United States Census Bureau as Block Group 2 of Census Tract 5991 of Los Angeles County, California, it is 21 nautical miles (39 km) long and contains 147.13 km2 (56.81 sq mi) of land. The island is officially uninhabited as of 2000 U.S. Census. It is estimated, however, that the number of military and civilian personnel present on the island at any given time is at least 300. The city of San Clemente in Orange County, California is named after the island.

This region experiences warm (but not hot) and dry summers, with no average monthly temperatures above 71.6 °F. According to the Köppen Climate Classification system, San Clemente Island has a warm-summer Mediterranean climate, abbreviated "Csb" on climate maps.

Earthworms appear to have been introduced in 2008 in soil from the mainland used in a road construction project. In this earthworm-free region, the worms alter the soil and microbial communities which allows nonnative plants to alter the island’s unique ecosystem and threaten biodiversity that exists there.

Later inhabitants left trade materials from the northern islands and from the mainland, including Coso obsidian from the California desert. It has not been established what tribe the recent inhabitants belonged to, although the Tongva, who are well attested from Santa Catalina Island, are the most likely candidates. The Chumash, who occupied the northern Channel Islands, may have influenced the inhabitants. Evidence of battles; 'the skeletons of dozens of men piled, one upon another' were also noted on San Clemente and San Nicolas.

The first European to sight the island was Juan Rodríguez Cabrillo in 1542, who named it Victoria. It was renamed by Spanish explorer Sebastián Vizcaíno, who spotted it on November 23, 1602, Saint Clement's feast day. It was used by ranchers, fishermen, and smugglers during the 19th century and into the 20th century.

In 1835, the whaleship Elbe of Poughkeepsie, New York, under Captain Josiah B. Whippey (or Whipple), hunted sperm whales as far north as "St. Clements Island" (San Clemente Island). The American steamship Lansing, as well as the steam-schooner California, both anchored in Pyramid Cove, on the south side of San Clemente Island, to process blue, fin and humpback whales caught by their "killer boats" (steam-driven whale catchers)—the former between 1926 and 1930, and the latter between 1933 and 1937. In 1935, the Norwegian factory ship Esperanza caught blue whales as far north as San Clemente Island. 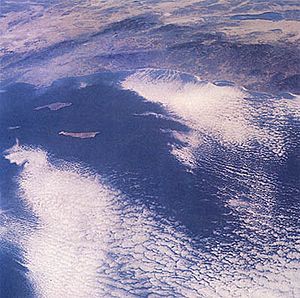 The US Navy acquired the island in 1934. It is the Navy's only remaining ship-to-shore live firing range, and is the center of the integrated air/land/sea San Clemente Island Range Complex covering 2,620 nm2 (8,990 km2).

During World War II, the island was used as a training ground for amphibious landing craft. These small to mid-sized ships were crucial to the island hopping that would be required to attack the islands occupied by the Japanese.

It is an active sonar base and has a $21 million simulated embassy for commando training.

There is a US Navy rocket-test facility on San Clemente. Some Polaris-program test rockets were launched from San Clemente between 1957 and 1960. The SEALAB III project took place off San Clemente in February 1969.

The US Navy uses the island as an auxiliary naval airfield, Naval Auxiliary Landing Field San Clemente Island. The main runway 23/05 is used for carrier training by the Navy. Other branches also use this airfield, including the United States Coast Guard. Pilots that use this airfield find it to be one of the most demanding airbases in the US, known for its high winds and dangerous terrain surrounding the runway.

The airfield is home to the United States Navy SEALs training facilities located north of the runways.

All content from Kiddle encyclopedia articles (including the article images and facts) can be freely used under Attribution-ShareAlike license, unless stated otherwise. Cite this article:
San Clemente Island Facts for Kids. Kiddle Encyclopedia.