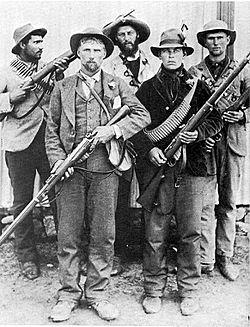 A commando is a soldier or operative of an elite light infantry or special operations force often specializing in amphibious landings, parachuting or abseiling.

Originally "a commando" was a type of combat unit, as opposed to an individual in that unit. In other languages, commando and kommando denote a "command", including the sense of a military or an elite special operations unit.

In English, occasionally to distinguish between an individual commando and the unit Commando, the unit is capitalized.

The word stems from the Afrikaans word kommando, which translates roughly to "mobile infantry regiment". This term originally referred to mounted infantry regiments, who fought against the British Army in the first and second Boer Wars.

All content from Kiddle encyclopedia articles (including the article images and facts) can be freely used under Attribution-ShareAlike license, unless stated otherwise. Cite this article:
Commando Facts for Kids. Kiddle Encyclopedia.