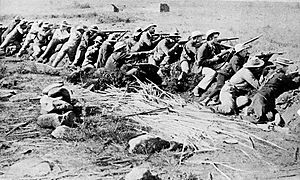 The Second Boer War (Dutch: Tweede Boerenoorlog, Afrikaans: Tweede Vryheidsoorlog or Tweede Boereoorlog) was a war. It lasted from 11 October 1899 until 31 May 1902. In the war, the British Empire fought against the Afrikaans-speaking Dutch settlers of two independent Boer republics, the South African Republic (Transvaal Republic) and the Orange Free State. Winston Churchill, who later became famous, was captured but escaped. At this time, the British made use of concentration camps. This weakened the Boers. It helped the British stop the war from lasting any longer.

The Second Boer War is a part of what are known as the Boer Wars. These include the lesser known First Boer War that took place from December 1880 to March 1881.

All content from Kiddle encyclopedia articles (including the article images and facts) can be freely used under Attribution-ShareAlike license, unless stated otherwise. Cite this article:
Second Boer War Facts for Kids. Kiddle Encyclopedia.