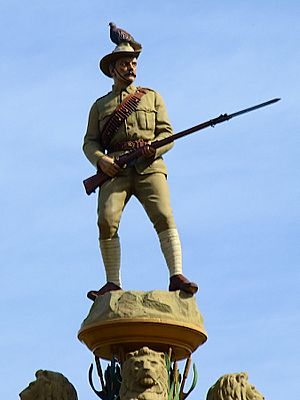 Monument to British soldiers in the war

In the 19th Century Scramble for Africa, the British Empire tried to control all of southern Africa. They won control of the Cape of Good Hope in 1815 at the end of the Napoleonic Wars. Many Boers (Dutch, German and French farmers) did not like Britain controlling the area. The British taxed them, made English the official language, and in 1834 abolished slavery. Some of the Boers moved north in the Great Trek and made a new country called the Orange Free State. In 1877 the British Army moved in to control the Orange Free State in pursuit of diamonds, one of the Orange Free State's rich natural resources. On 16 December 1880 the First Boer War began. It took ten weeks in 1880 and 1881. The British were defeated.

From 1896 to 1899 Governor of the Cape and High Commissioner for South Africa, Alfred Milner made preparations for another war in order to gain the wealth of the Orange Free State and in September 1899 British troops arrived in South Africa. Paul Kruger president of the Transvaal sent Britain an ultimatum asking strongly for their departure.

Boer farmers from Sandspruit, Volksrust, the Orange Free State, and the Transvaal fought in the war. As the Boers lost men in battle they recruited young boys and old men to fight. Black people also fought alongside the Boers in the war and they made up 20 to 25 percent of total Boer manpower. The German Empire was friendly to their cause, and the Boers used Krupp guns. Much of the fighting was on horseback. As the Boers lost battle after battle they were eventually forced to make peace on the 23rd of March, 1902, and surrender to British authority.

All content from Kiddle encyclopedia articles (including the article images and facts) can be freely used under Attribution-ShareAlike license, unless stated otherwise. Cite this article:
First Boer War Facts for Kids. Kiddle Encyclopedia.