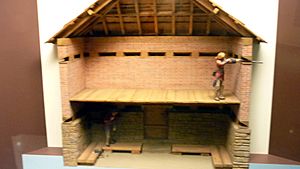 Model of the Fort Pitt blockhouse

In military science, a blockhouse is a small fortification. It usually has one or more rooms with loopholes, allowing its defenders to fire rifles or handguns in various directions. It usually refers to an isolated fort in the form of a single building. It serves as a defensive strong point against any enemy that does not possess siege equipment or, in modern times, artillery. A fortification intended to resist these weapons is more likely to qualify as a fortress or a redoubt.

In modern times, it may be a pillbox, a small underground bunker. However, a blockhouse may also refer to a room within a larger fortification, usually a battery or redoubt. The term "blockhouse" is of uncertain origin, perhaps related to Middle Dutch blokhus and 18th-century French blocus (blockade).

All content from Kiddle encyclopedia articles (including the article images and facts) can be freely used under Attribution-ShareAlike license, unless stated otherwise. Cite this article:
Blockhouse Facts for Kids. Kiddle Encyclopedia.