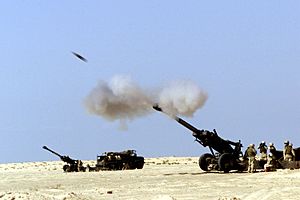 Artillery is a word for the big guns used in an army, for example cannons and howitzers. Such guns are used to shoot targets far away. Artillery is often used to stop enemy troops using an area, to bombard trenches and buildings with enemies in it and to support friendly units. There are many different weapons that are called artillery. They may shoot shells or missiles. Newer systems can even drop mines over a big area, making the area uncrossable. Anti-aircraft warfare includes the use of artillery to fight planes and other aircraft. Those who fire the artillery piece are called "gunners". In most cases someone else, called a "spotter" must see the enemy, because artillery often shoots in high angles and over terrain. The artillery crews do not have to see the enemy to damage them.

All content from Kiddle encyclopedia articles (including the article images and facts) can be freely used under Attribution-ShareAlike license, unless stated otherwise. Cite this article:
Artillery Facts for Kids. Kiddle Encyclopedia.