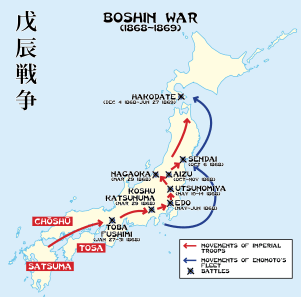 Campaign map of the Boshin War (1868–69). The western lands of Satsuma, Chōshū and Tosa (in red) joined forces to defeat the Shogunate forces at Toba-Fushimi, and then progressively took control of the rest of Japan until the final stand-off in the northern island of Hokkaidō.

The Boshin War (戊辰戦争code: ja is deprecated , Boshin Sensō, "War of the Year of the Yang Earth Dragon"), sometimes known as the Japanese Revolution, was a civil war in Japan, fought from 1868 to 1869 between forces of the ruling Tokugawa shogunate and those seeking the Meiji Restoration of political power to the Imperial Court.

All content from Kiddle encyclopedia articles (including the article images and facts) can be freely used under Attribution-ShareAlike license, unless stated otherwise. Cite this article:
Boshin War Facts for Kids. Kiddle Encyclopedia.