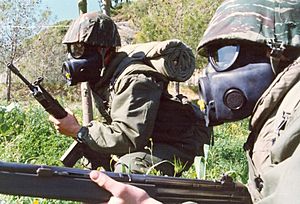 A gas mask is a kind of mask that fits over the face area and nose. It protects from poison gases and many other hazards in the air.

During World War II gas masks were sent all over England. They were worn everywhere, even to sleep, in case of surprise attack. However, the Germans didn't attack with gas bombs.

Gas masks have a filter, a type of material which lets good air in.

A modern mask typically is constructed of an elastic polymer in various sizes. It is fitted with various adjustable straps which may be tightened to secure a good fit. Crucially, it is connected to a filter cartridge near the mouth either directly, or via a flexible hose. Some models contain drinking tubes which may be connected to a water bottle. Corrective lens inserts are also available for users who require them.

All content from Kiddle encyclopedia articles (including the article images and facts) can be freely used under Attribution-ShareAlike license, unless stated otherwise. Cite this article:
Gas mask Facts for Kids. Kiddle Encyclopedia.