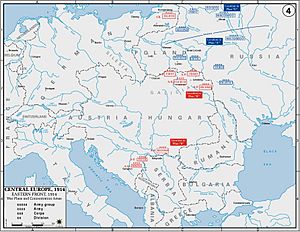 The Eastern Front of World War I was the theatre in which Germany and Austria-Hungary fought Russia. This front had more troops than the Western Front but was at least three and up to five times longer. Planning where to concentrate forces was very important because railways were few and troops could not be moved and reinforced as quickly as on the Western Front.

Russia lost many battles, but her overall situation improved as she improved her forces and more and more allies entered the war on her side. The Eastern Front ended when the Russian Civil War broke out between the Communists and Russian Social-Democratic Party in 1917 and the Communists signed a peace treaty with Germany so they could focus on winning the Civil War.

All content from Kiddle encyclopedia articles (including the article images and facts) can be freely used under Attribution-ShareAlike license, unless stated otherwise. Cite this article:
Eastern Front (World War I) Facts for Kids. Kiddle Encyclopedia.