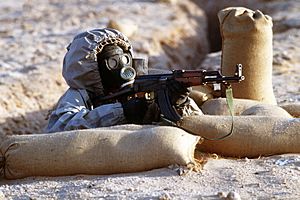 A soldier in Syria, with an AK-47 rifle and a gas mask 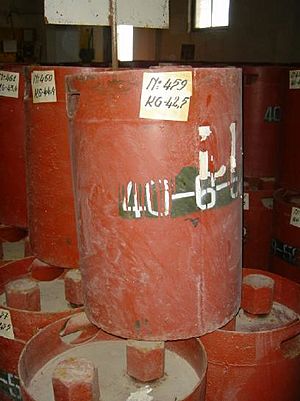 A barrel of a chemical weapon, produced in the Soviet Union, from Albania

Poison gas is any gas that is also a poison. Poison gases can kill or injure a person if present in a high enough concentration. There is a diverse range of different poison gases and each has unique properties. Many toxic liquids are also volatile and their vapors are poison gas. "Poison gas" can refer to poisons in chemical weapons, but most of them are in fact liquids, for example mustard gas and VX are viscous liquids that are dispersed into fine mists.

In small amounts, corrosive poison gases usually cause irritation, and may have a smell, but this is not universal. There are several gases that can kill insidiously, without a warning smell or irritation.

All gases other than oxygen can displace air, and cause death by asphyxiation. This does not make them poison gases. Nitrogen and carbon dioxide are two common examples. This has to be taken into account in handling of any compressed or liquified gas. Gases can be also dangerous because they are flammable (easily bursting into flame).

Poison gases can cause injury more easily than solid or liquid poisons because they diffuse (move) in the air, exposing skin, and are easily breathed in. Immediate contact with corrosive gas leads to chemical burns of the skin and lungs. When absorbed into the inside of the human body and into the blood, either by breathing in or through skin, several poison gases cause a poisoning. In a poisoning, medical help is often necessary; simply removing the victim from the gas is not enough to prevent symptoms.

Poison gases are used in industry as chemical reagents. The chemical reactions they can be used for are more important than their toxicity. Today, chemists try to avoid the use of poisonous gases, but it is often not possible. Examples of large-volume industrial poisonous gases are hydrogen sulfide, cracked from oil, chlorine, in diverse chemical uses and to disinfect drinking water, and ammonia, which is a valuable fertilizer into itself and can be converted into a range of other fertilizers, in addition to chemical uses.

Some fumigants (chemicals used to kill pests) are also poison gases, for example phosphine, which is used to kill pests living in grains. The advantage of a gas is that it evaporates after use, so that if food is treated with gas, there is no need to rinse it to remove the poison. Some gasses can kill you and some can't. There is some advantages and disadvantages about gas.

All content from Kiddle encyclopedia articles (including the article images and facts) can be freely used under Attribution-ShareAlike license, unless stated otherwise. Cite this article:
Poison gas Facts for Kids. Kiddle Encyclopedia.