Kids Encyclopedia Facts
"LA County" redirects here. For the equivalent of counties in Louisiana, see List of parishes in Louisiana.

Los Angeles County, officially the County of Los Angeles, and sometimes abbreviated as L.A. County, is the most populous county in the United States and in the U.S. state of California, with more than ten million inhabitants as of the 2020 census. It is the most populous non–state-level government entity in the United States. Its population is greater than that of 40 individual U.S. states. Los Angeles County has the 3rd largest metropolitan area economy in the world, with a nominal GDP of more than $1.0 trillion. At 4,083 square miles (10,570 km2) and with 88 incorporated cities and many unincorporated areas, it is home to more than one-quarter of California residents and is one of the most ethnically diverse counties in the United States.

Los Angeles County is one of the original counties of California, created at the time of statehood in 1850. The county originally included parts of what are now Kern, San Bernardino, Riverside and Orange counties. As the population increased, sections were split off to organize San Bernardino County in 1853, Kern County in 1866, and Orange County in 1889. 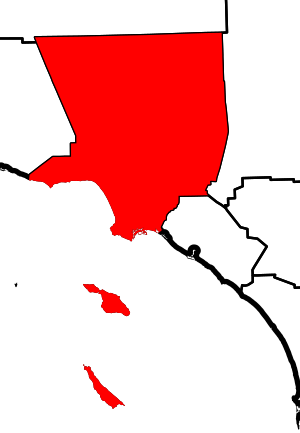 According to the U.S. Census Bureau, the county has an area of 4,751 square miles (12,310 km2), of which 4,058 square miles (10,510 km2) is land and 693 square miles (1,790 km2) (15%) is water. Los Angeles County borders 70 miles (110 km) of coast on the Pacific Ocean and encompasses mountain ranges, valleys, forests, islands, lakes, rivers, and desert. The Los Angeles River, Rio Hondo, the San Gabriel River and the Santa Clara River flow in Los Angeles County, while the primary mountain ranges are the Santa Monica Mountains and the San Gabriel Mountains. The western extent of the Mojave Desert begins in the Antelope Valley, in the northeastern part of the county.

The county is divided west-to-east by the San Gabriel Mountains, which are part of the Transverse Ranges of southern California, and are contained mostly within the Angeles National Forest. Most of the county's highest peaks are in the San Gabriel Mountains, including Mount San Antonio 10,068 feet (3,069 m)) at the Los Angeles-San Bernardino county lines, Mount Baden-Powell 9,399 feet (2,865 m), Mount Burnham 8,997 feet (2,742 m) and Mount Wilson 5,710 feet (1,740 m). Several lower mountains are in the northern, western, and southwestern parts of the county, including the San Emigdio Mountains, the southernmost part of Tehachapi Mountains and the Sierra Pelona Mountains.

Los Angeles County includes San Clemente Island and Santa Catalina Island, which are part of the Channel Islands archipelago off the Pacific Coast.

Major divisions of the county

The county has a large population of Asian Americans, being home to the largest numbers of Burmese, Cambodian, Chinese, Filipino, Indonesian, Korean, Sri Lankan, Taiwanese, and Thai outside their respective countries. The largest Asian groups in Los Angeles County are 4.0% Chinese, 3.3% Filipino, 2.2% Korean, 1.0% Japanese, 0.9% Vietnamese, 0.8% Indian, and 0.3% Cambodian.

Racial and Ethnic Composition since 1960

The county has the largest Native American population of any county in the nation: according to the 2000 census, it has more than 153,550 people of indigenous descent, and most are from Latin America.

As estimated by the Public Policy Institute of California in 2008, Los Angeles County is home to more than one-third of California's undocumented immigrants, who make up more than ten percent of the population.

Los Angeles County is home to the largest Armenian population outside of Armenia.

Los Angeles County contains the largest Iranian population outside of Iran of any other county or county equivalent globally. 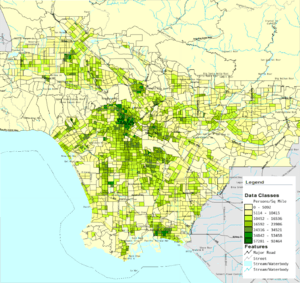 Of the 3,133,774 households 37% had children under the age of 18 living with them, 48% were married couples living together, 15% had a female householder with no husband present, and 32% were non-families. 25% of households were one person and 7% were one person aged 65 or older. The average household size was 2.98 and the average family size was 3.61. 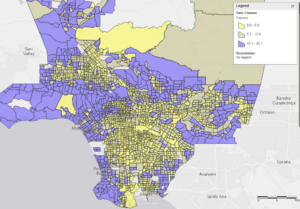 Percent of households with incomes above $150k across LA County census tracts.

In 2015, there were over two thousand Christian churches, the majority of which are Catholic. Roman Catholic adherents number close to 40% of the population. There were 202 Jewish synagogues, 145 Buddhist temples, 38 Muslim mosques, 44 Baháʼí Faith worship centers, 37 Hindu temples, 28 Tenrikyo churches and fellowships, 16 Shinto worship centers, and 14 Sikh gurdwaras in the county. The Roman Catholic Archdiocese of Los Angeles has approximately 5 million members and is the largest diocese in the United States. In 2014, the county had 3,275 religious organizations, the most out of all US counties. 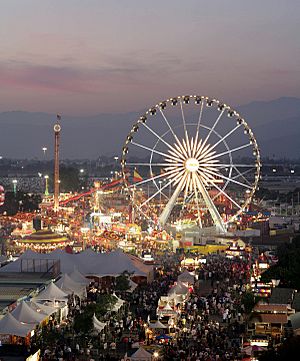 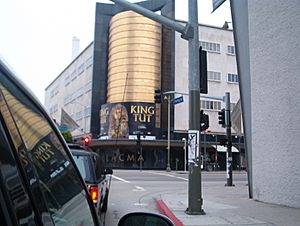 Photo of the Los Angeles County Museum of Art during its 2005 Ancient Egypt exhibit.

Venice Beach is a popular attraction where its Muscle Beach used to find throngs of tourists admiring "hardbodies". Today, it is more arts-centered. Santa Monica's pier is a well known tourist spot, famous for its ferris wheel and bumper car rides, which were featured in the introductory segment of the television sitcom Three's Company. Further north in Pacific Palisades one finds the beaches used in the television series Baywatch. The fabled Malibu, home of many a film or television star, lies west of it.

In the mountain, canyon, and desert areas one may find Vasquez Rocks Natural Area Park, where many old Westerns were filmed. Mount Wilson Observatory in the San Gabriel Mountains is open for the public to view astronomical stars from its telescope, now computer-assisted. Many county residents find relaxation in water skiing and swimming at Castaic Lake Recreation Area – the county's largest park by area – as well as enjoying natural surroundings and starry nights at Saddleback Butte State Park in the eastern Antelope Valley – California State Parks' largest in area within the county. The California Poppy Reserve is located in the western Antelope Valley and shows off the State's flower in great quantity on its rolling hills every spring. 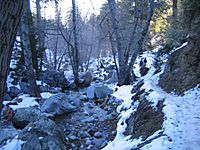 Los Angeles International Airport (LAX), located in the Westchester district, is the primary commercial airport for commercial airlines in the county and the Greater Los Angeles Area. LAX is operated by Los Angeles World Airports (LAWA), an agency of the City of Los Angeles.

Other important commercial airports in Los Angeles County include:

Los Angeles is a major freight-railroad transportation center, largely due to the large volumes of freight moving in and out of the county's sea port facilities. The ports are connected to the downtown rail yards and to the main lines of Union Pacific and Burlington Northern Santa Fe headed east via a grade-separated, freight rail corridor known as the Alameda Corridor.

Passenger rail service is provided in the county by Amtrak, Los Angeles Metro Rail and Metrolink.

Amtrak has the following intercity Amtrak service at Union Station in the city of Los Angeles:

Union Station is also the primary hub for Metrolink commuter rail, which serves much of the Greater Los Angeles Area.

The county's two main seaports are the Port of Los Angeles and the Port of Long Beach. Together they handle over a quarter of all container traffic entering the United States, making the complex the largest and most important port in the country, and the third-largest port in the world by shipping volume.

The Port of Los Angeles is the largest cruise ship center on the West Coast, handling more than 1 million passengers annually.

The Port of Long Beach is home to the Sea Launch program, which uses a floating launch platform to insert payloads into orbits that would be difficult to attain from existing land-based launch sites.

Catalina Express ferries link the Catalina Island city of Avalon to the mainland at San Pedro and Long Beach, as well as Dana Point in Orange County.

There are 88 incorporated cities in Los Angeles County. According to the 2010 U.S. Census, the most populous are:

The population ranking of the following table is based on the 2010 census of Los Angeles County. 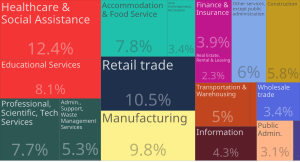 The following major companies have headquarters in Los Angeles County:

The Los Angeles County Office of Education provides a supporting role for school districts in the area. The county office also operates two magnet schools, the International Polytechnic High School and Los Angeles County High School for the Arts. There are a number of private schools in the county, most notably those operated by the Roman Catholic Archdiocese.

All content from Kiddle encyclopedia articles (including the article images and facts) can be freely used under Attribution-ShareAlike license, unless stated otherwise. Cite this article:
Los Angeles County, California Facts for Kids. Kiddle Encyclopedia.