The Santa Monica Mountains are a group of mountains in southern California in the United States.

Scientists who study rocks say that the northern Channel Islands are a westward extension of the Santa Monicas into the Pacific Ocean. The range was created by the Raymond Fault which made the rocks push up and sink down over time. This has made old volcano rock come to the surface. Malibu Creek cuts the mountain range in two.

On January 17, 2007, an unusually cold storm brought snow in the Santa Monica Mountains. Malibu picked up three inches (eight centimeters) of snow – the first measurable snow in five decades (50 years). Snow was reported on Boney Peak, in the winter of 2005; and in March 2006, snow also fell on the summit of the mountain.

Cahuenga Pass, present-day site of U.S. Route 101, is the easiest pass through the range connecting the Los Angeles Basin to the San Fernando Valley. In the 1800s, two battles were fought there, and the Treaty of Cahuenga was signed nearby. In the heyday of Hollywood movie studios clustered on both sides of it. Sepulveda Pass is the main north–south pass to the west, connecting the Westside to Sherman Oaks via the San Diego Freeway (I-405). Farther west are Topanga Canyon Boulevard (SR 27), Malibu Canyon Road, and Kanan Dume Road. Mulholland Drive runs much of the length of the Santa Monica Mountains, from Cahuenga Pass to Woodland Hills while the Mulholland Highway runs from Woodland Hills to Sequit Point. The eastern end of the range, located in the City of Los Angeles, is more intensively developed than the western end of the range. The city of Malibu runs between the coast and the leading mountain ridge, from Topanga Canyon in the east to Leo Carrillo State Park in the west. The term Malibu Ozarks is sometimes used derogatorily (or ironically) for the unincorporated part of Malibu beyond the leading mountain ridge and lacking an ocean view; the term is often used synonymously with "818 Malibu" (referring to the less desirable San Fernando Valley telephone area code prefix).

Places along the north slope of the mountains include (from east to west):

Places along the south slope of the mountains include (from east to west):

Griffith Park and finally Elysian Park are the eastern end of the Santa Monica Mountains. Griffith Park is separated from the rest of the Santa Monica Mountains to the west by the Cahuenga Pass, over which the 101 Freeway passes from the San Fernando Valley into Hollywood. Elysian Park is the easternmost part of the mountains and is bordered by the Los Angeles River to the east. 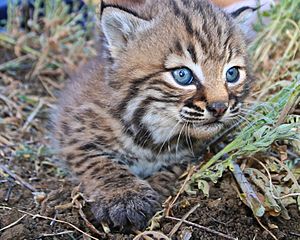 The Santa Monica Mountains are in the California chaparral and woodlands ecoregion and are covered by hundreds of local plant species, some of which are very rare, and others of which have become popular ornamentals. The range is host to an immense variety of wildlife, from mountain lions to the endangered steelhead. The mountain lion population within the Santa Monica Mountains (which includes the Simi Hills & Santa Susana Pass) is severely depleted with only seven known living adult individuals. The primary cause of the decline is due to a combination of traffic related mortality (three from the area were killed within a matter of months), anti-coagulants ingested from human-poisoned prey (two individuals within the Simi Hills) and attacks by other, more dominant mountain lions (an elder male, known as P1, killed both his son and his mate. This is thought to be due to a lack of space available.) Snakes are common but only occasionally seen – the Southern Pacific Rattlesnake (the only venomous species), Mountain Kingsnake, California Kingsnake, Gopher snake, and Garter snake.

All content from Kiddle encyclopedia articles (including the article images and facts) can be freely used under Attribution-ShareAlike license, unless stated otherwise. Cite this article:
Santa Monica Mountains Facts for Kids. Kiddle Encyclopedia.