Calabasas is a city in Los Angeles County, California, located in the hills west of the San Fernando Valley and in the northwest Santa Monica Mountains between Woodland Hills, Agoura Hills, West Hills, Hidden Hills, and Malibu, California. As of the 2010 census, the city's population was 23,058, up from 20,033 at the 2000 census. The city was formally incorporated in 1991. It is noted for its wealthy residents and gated neighborhoods.

The Leonis Adobe, an adobe structure in Old Town Calabasas, dates from 1844 and is one of the oldest surviving buildings in the greater Los Angeles area.

It is generally accepted that the name of Calabasas is derived from the Spanish calabaza meaning "pumpkin", "squash", or "gourd" (cf. calabash). Some historians hold the theory that Calabasas is derived from the Chumash word calahoosa which is said to mean "where the wild geese fly." Owing to vast presence of wild squash plants in the area, the squash theory is more prevalent among local residents. At the top of the Calabasas grade, which is east of Las Virgenes Road on the original El Camino Real, legend has it in 1824 a Basque rancher from Oxnard spilled a wagonload of pumpkins on the road en route to Los Angeles. The following spring, hundreds of pumpkin seeds sprouted alongside the road. The area was named Las Calabasas - the place where the pumpkins fell.

In honor of its namesake, the City of Calabasas and the Calabasas Chamber of Commerce hold an annual Pumpkin Festival in October, including carnival games, exhibits, demonstrations, and live entertainment. The festival has evolved from a small-town fair to a significant annual event. Though the current Pumpkin Festival is held at Juan Bautista de Anza Park in Calabasas, the original festival was believed to have taken place where the traveling wagon carrying pumpkins overturned and started the area's first pumpkin patch.

The city's official logo, depicting a red-tailed hawk flying over the Santa Monica Mountains, symbolizes a commitment to preserving the community's natural beauty and semirural quality of life. This logo is featured on the Calabasas city flag which is flown in front of City Hall and hangs in the City Council Chambers.

The city is located in the southwest corner of the San Fernando Valley and comprises a portion of the Santa Monica Mountains. It is 22 miles (35 km) away from downtown Los Angeles. It is bordered by the Woodland Hills area of Los Angeles to the northeast, Topanga to the east, Malibu to the south, Agoura Hills to the west, and Hidden Hills to the north. The historic El Camino Real runs east–west through Calabasas as the Ventura Freeway 101.

In a part of the city near Calabasas High School and A.C. Stelle Middle School, all of the public streets are named patriotically. These include Declaration Ave., America Way, Liberty Bell Rd., Paul Revere Dr., Founder's Dr., Bon Homme Rd., and others.

One of the oldest neighborhoods in Calabasas is Park Moderne, or the Bird Streets. A former artists' colony, remnants remain of the club house, pool, and cabins scattered across streets with bird names, such as Meadow Lark, Blackbird, Bluebird, and Hummingbird located right behind Calabasas High School. 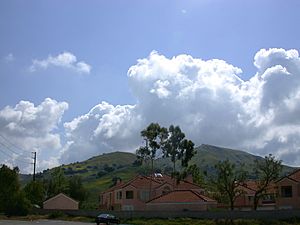 Mont Calabasas, a community on Las Virgenes Road, was annexed into the city of Calabasas in 2011. Prior to annexation, the neighborhood was located in an unincorporated area of Los Angeles County.

The most celebrity-populated neighborhood in the general area of Calabasas is Hidden Hills, a separately incorporated city, which is featured on the E! TV series Keeping Up with the Kardashians.

According to the 2010 United States Census, Calabasas had a median household income of $124,583, with 6.6% of the population living below the federal poverty line.

The city sponsors many annual events including: 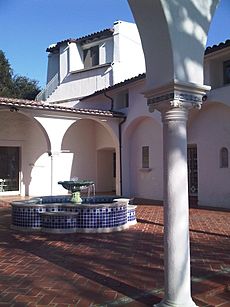 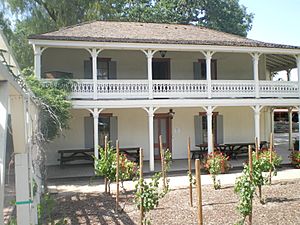 The Claretians (The Missionary Sons of the Immaculate Heart of Mary in Rome, or The Claretian Order) of the Roman Catholic Church had come to Southern California by way of Mexico in the early 1900s, working in Los Angeles inner-city missions. From 1952 to 1977, they operated the Theological Seminary of Claretville and the Immaculate Heart Claretian Novitiate on the former Gillette Estate, which they renamed Claretville. Thomas Aquinas College rented the Claretville campus from the Claretians from 1971 to 1978. When the Claretians sold their Claretville property in 1978 to Clare Prophet and her Church Universal and Triumphant, Thomas Aquinas College purchased, moved to, and began construction on a permanent campus in Santa Paula, California. At the present time, the Gillette Estate/Claretville property is now known as the King Gillette Ranch, at the intersection of Mulholland Highway and Las Virgenes Road in Calabasas. The land and historic structures by architect Wallace Neff are now part of Malibu Creek State Park.

Brandon’s Village is a universally accessible playground located at Gates Canyon Park in Calabasas. It serves over 5,000 special-needs children from Calabasas and surrounding communities. Designed by Shane's Inspiration, a nonprofit organization that designs and builds universally accessible playgrounds, Brandon’s Village is about 1 acre (4,000 m2) in size. Its playground equipment is over 70% independently playable by children with disabilities, and also provides meaningful and stimulating play opportunities for children without disabilities.

The Hindu Temple of Calabasas

The large Malibu Hindu Temple, located on Las Virgenes Road in Calabasas, is visited by many Hindus and others from both in and outside California. The Hindu Temple Society of Southern California was incorporated in the State of California as a nonprofit religious organization on August 18, 1977.

All content from Kiddle encyclopedia articles (including the article images and facts) can be freely used under Attribution-ShareAlike license, unless stated otherwise. Cite this article:
Calabasas, California Facts for Kids. Kiddle Encyclopedia.