The Chumash are a Native American people who historically inhabited the central and southern coastal regions of California, in portions of what is now San Luis Obispo, Santa Barbara, Ventura and Los Angeles counties, extending from Morro Bay in the north to Malibu in the south. They also occupied three of the Channel Islands: Santa Cruz, Santa Rosa, and San Miguel; the smaller island of Anacapa was likely inhabited seasonally due to the lack of a consistent water source.

Archaeological research demonstrates that the Chumash have deep roots in the Santa Barbara Channel area and lived along the southern California coast for millennia.

They also inhabited the Antelope Valley in Palmdale, California, and traded with the Kitanemuk people in the Mojave desert. 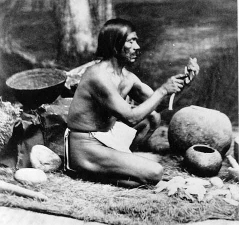 The Chumash were hunter-gatherers and were adept at fishing at the time of Spanish colonization. They are one of the relatively few New World peoples who regularly navigated the ocean (another was the Tongva, a neighboring tribe to the south). Some settlements built a plank boat (tomol), which facilitated the distribution of goods and could be used for whaling. 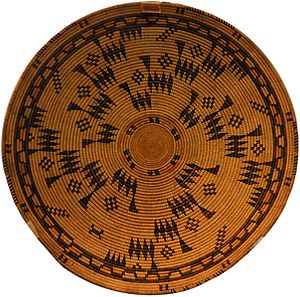 Anthropologists have long collected Chumash baskets. Two of the finest collections are at the Smithsonian Institution in Washington, DC, and the Musée de l'Homme (Museum of Mankind) in Paris. The Santa Barbara Museum of Natural History is believed to have the largest collection of Chumash baskets.

The Chumash of the Northern Channel Islands were at the center of an intense regional trade network. Beads made from Olivella shells were manufactured on the Channel Islands and used as a form of currency by the Chumash. These shell beads were traded to neighboring groups and have been found throughout Alta California. Over the course of late prehistory, millions of shell beads were manufactured and traded from Santa Cruz Island. It has been suggested that exclusive control over stone quarries used to manufacture the drills needed in bead production could have played a role in the development of social complexity in Chumash society.

Foods historically consumed by the Chumash include several marine species, such as black abalone, the Pacific littleneck clam, red abalone, the bent-nosed clam, ostrea lurida oysters, angular unicorn snails, and the butternut clam. They also made flour from the dried fruits of the laurel sumac.

Herbs used in traditional Chumash medicine include thick-leaved yerba santa, used to keep airways open for proper breathing; laurel sumac, the root bark of which was used to make a herbal tea for treating dysentery; and black sage, the leaves and stems were made into a strong sun tea. This was rubbed on the painful area or used to soak one's feet. The plant contains diterpenoids, such as aethiopinone and ursolic acid, which are known pain relievers.

The Chumash formerly practiced an initiation rite involving the use of sacred datura (moymoy in their language). When a boy was 8 years old, his mother would give him a preparation of it to drink. This was supposed to be a spiritual challenge to help him develop the spiritual wellbeing required to become a man. Not all of the boys survived the poison.

Remains of a developed Chumash culture, including rock paintings apparently depicting the Chumash cosmology, such as Chumash Painted Cave State Historic Park, can still be seen.

A centuries-old oak tree in California is considered to have a Chumash arborglyph, a carving of a six-legged creature with a head-dress including a crown and two spheres. Previously thought to have been carved by cowboys, it was visited in 2007 by paleontologist Rex Saint Onge, who identified the three-foot carving as being of Chumash origin and related to other Chumash cave paintings in California. Further studies have led Saint Onge to believe these are not simply the work of Chumash, but by Chumash shamans who were conscious observers of the stars, and used these carvings to calibrate the Chumash calendar.

All content from Kiddle encyclopedia articles (including the article images and facts) can be freely used under Attribution-ShareAlike license, unless stated otherwise. Cite this article:
Chumash people Facts for Kids. Kiddle Encyclopedia.