Chumash Indian Museum is a Native American Interpretive Center in northeast Thousand Oaks, California. It is the site of a former Chumash village, known as Sap'wi (meaning "House of the Deer"). It is located in Oakbrook Regional Park, a 432-acre park which is home to a replica of a Chumash village and thousand year-old Chumash pictographs. The pictographs by nearby Birthing Cave are not open to the public, but can be observed on docent-led tours. Chumash people inhabited the village 10,000 years ago.

It became a designated archaeological zone in 1971 after the discovery of nearly twenty caves at the property. It was designated Ventura County Historical Landmark #90 in 1983. It is designated Thousand Oaks City Landmark No. 5. The museum is home to exhibits of various Chumash artifacts, paintings and historical items.

Dedicated to preserving the cultural and historical legacy of the Chumash people, the museum was established in 1994 and is operated by the nonprofit Oakbrook Park Chumash Indian Corp. It is owned by Conejo Recreation and Park District.

The museum grounds were severely damaged by the 2018 Woolsey Fire. 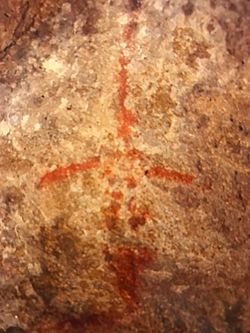 The cave paintings are found in two nearby rock shelters. The two shelters compromise a few panels, each of which contains one or more red motifs. Notable paintings include that of a broadbill swordfish, which until recently, was a common species in local waters. The swordfish was one of the few fish species associated with the shaman. The pictographs most likely represent a Swordfish Shaman’s spirit helper. Swordfish shamanism was truly practiced at the cave for thousands of years. The pictographs are between 4000–6000 years old, and can be viewed on docent-led tours. 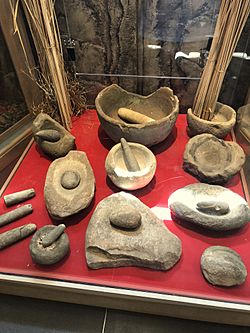 Artifacts such as mortars and pestles can be seen in the interior exhibit.

Interior parts of the 5,400 sq. ft. museum contains locally retrieved artifacts such as tools used for grinding acorns, murals, instruments, and games. It also features a reconstructed tomol (Chumash canoe), mockups of cougars and other wildlife, as well as a diorama depicting life before the Spanish arrived. Items are routinely on loan from the Santa Barbara Museum of Natural History, including woven bowls, grinding tools, and other artifacts. 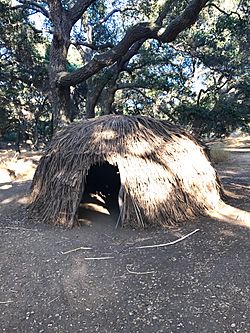 Replica of a Chumash 'ap (house) in the reconstructed Chumash village.

Outdoor exhibits include several gardens, a reconstructed Chumash village, and a traditional Chumash playing field, known as a malamtepupi. Furthermore, it contains miles of hiking trails, as well as a massive oak tree rumored to be the oldest and possibly largest in the city of Thousand Oaks. It has a 12-foot trunk diameter, a height of 30 feet, and a canopy spread of 60 feet. It is home to 11 archeological sites clustered along the stream-bed, including ancient pictographs and bedrock mortars utilized for grinding acorns and other foods.

Behind the museum is a 25-acre nature preserve in a canyon following the Conejo Creek. The shaded trail follows groves of old oak trees dating back 200–300 years, as well as mortar holes, the reconstructed Chumash village, and dramatic rock formations. The trail also goes by the remains of a former house with a brick oven. This was the site where Lang Ranch’ caretaker lived, dating back to the early 1900s. Weather-carved sandstone formations can be found after passing Bear Flats Oak Grove and crossing over Crystal Spring. Prominent formations include Elephant Rock, a finely etched rock with a trunk; and Calm Rock, shaped in the form of a partly opened clam.

Four gardens featuring native flora with interpretive signs can be found near the museum. Funding for the gardens was provided by Edison International, Eagle Scouts of Troop 787, and museum volunteers.

All content from Kiddle encyclopedia articles (including the article images and facts) can be freely used under Attribution-ShareAlike license, unless stated otherwise. Cite this article:
Chumash Indian Museum Facts for Kids. Kiddle Encyclopedia.