It is an ancient creek, which, historically, was a seasonal-running creek. The arroyo is today perennial due to urban runoff from irrigation. Its north fork carved Wildwood Canyon out of bedrock over several millennia. Paradise Falls in Wildwood Regional Park has been described as perhaps the "most visual representation" of the arroyo today. The south fork originates in the Conejo Hills above Newbury Park. It also follows Thousand Oaks Boulevard, where it runs directly along and below the boulevard. In certain areas, the creek runs through concrete culverts and runs underneath the street. Past Newbury Park's Hill Canyon, the creek meets with Arroyo Santa Rosa in Santa Rosa Valley as it runs through the Pleasant Valley basin on its way to its estuary at Mugu Lagoon. Due to limited access, suggestions have been made to make its banks into public amenities similar to that of San Antonio River Walk, or, developing a public use trail following the creek, similar to the bike path of Arroyo Simi in Simi Valley, California. It is part of the Calleguas Creek watershed, which drains an area of 343 sq. mi. in southern Ventura County.

Within Wildwood Regional Park, its gorge and its 40-foot (12 m) cascade, Paradise Falls, are among the park’s most visited attractions. 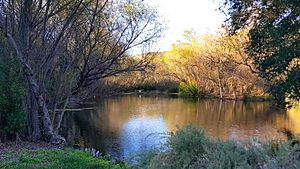 It runs from the Conejo Hills of Newbury Park, crosses horizontally Casa Conejo, before entering Thousand Oaks and Wildwood Regional Park. It originates in the Conejo Hills and streams into Hill Canyon and further into the Santa Rosa Valley, where it merges with Arroyo Santa Rosa and becomes Conejo Creek. Conejo Creek drains through the Pleasant Valley Basin, joins Calleguas Creek and enters into the Pacific Ocean by its estuary at Mugu Lagoon at the north end of the Santa Monica Mountains. Its northern border is made up by the Santa Susana Mountains, South Mountain and the Oak Ridge Mountains. Its southern boundary is compromised by the Santa Monica Mountains to the southwest and the Simi Hills to the southeast.

The western pond turtle is an endemic species to Arroyo Conejo.

It is debated whether Thousand Oaks will make a multi-use pathway along the creek, similar to that of Arroyo Simi in Simi Valley.

There are several parks and public open-space areas bordering the creek:

All content from Kiddle encyclopedia articles (including the article images and facts) can be freely used under Attribution-ShareAlike license, unless stated otherwise. Cite this article:
Arroyo Conejo Facts for Kids. Kiddle Encyclopedia.