The green sunfish (Lepomis cyanellus) is a species of freshwater fish in the sunfish family (Centrarchidae) of order Perciformes. A panfish popular with anglers, the green sunfish is also kept as an aquarium fish by hobbyists. They are usually caught by accident, while fishing for other game fish. Green sunfish can be caught with live bait such as nightcrawlers, waxworms, mealworms, and blood worms. Grocery store baits such as pieces of hot dog or corn kernels can even catch fish. Green sunfish are aggressive and will hit small lures. They can be caught with fly fishing tackle.

The green sunfish is said to have polarization sensitive vision not found in humans and other vertebrates mostly which helps in enhancement of visibility of target objects in scattering media, using a method called polarization difference imaging.

The green sunfish is native to a wide area of North America east of the Rocky Mountains, from the Hudson Bay basin in Canada, to the Gulf Coast in the United States, and northern Mexico. They are specifically indigenous to a number of lakes and rivers such as the Great Lakes and some of the basins of the Mississippi River. Green sunfish have been introduced to many bodies of water all across the United States, so are frequently encountered. L. cyanellus has been transplanted to many countries in Africa, Asia, and Europe, where it has become established in some.

The green sunfish is blue-green in color on its back and sides with yellow-flecked bony-ridged (ctenoid) scales, as well as yellow coloration on the ventral sides. The gill covers and sides of head have broken bright blue stripes, causing some to mistakenly confuse them with bluegill. They also have a dark spot located near the back end of the dorsal fin, the bases of the anal fins. and on the ear plate. It has a relatively big mouth and long snout that extends to beneath the middle of the eye. Its pectoral fins are short with rounded edges containing 13-14 pectoral fin rays, a dorsal fin with about 10 dorsal spines and a homocercal tail. The typical length ranges from about 3-7 in and usually weighs less than a pound. The green sunfish reaches a maximum recorded length of about 30 cm (12 in), with a maximum recorded weight of 960 g (2.2 lb). Identification of sunfish species from one another can sometimes be difficult as these species frequently hybridize. 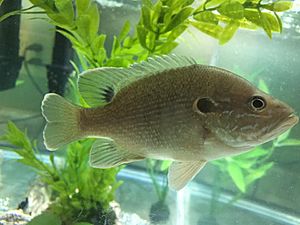 The species prefers areas in sluggish backwaters, lakes, and ponds with gravel, sand, or bedrock bottoms. They also can be found in very muddy waters and are able to tolerate poor water conditions. Green sunfish tend to spend their time hiding around rocks, submerged logs, plants, and other things that provide cover.

Its diet can include aquatic insects and larvae, insects that fall into the water, crayfish, snails, turtle food, some small fish, fish eggs, zooplankton, and other small invertebrates. They are omnivores. 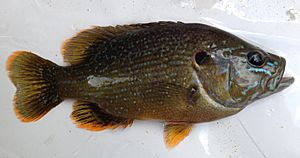 Green sunfish begin spawning in the summer with the exact time varying with location and water temperature. When they do spawn, the males create nests in shallow water by clearing depressions in the bottom, often near a type of shelter such as rocks or submerged logs. The male defends his nest from other males using visual displays and physical force when necessary. On occasion, simply constructing a nest is sufficient for the male to attract a mate, but when it is not he will court a female with grunts and lead her to his nest.

They continue their courtship dance, swimming with each other around the nest until the female descends to deposit her eggs in the nest. The female will lay 2,000 to 26,000 eggs and leave them for the male to guard. He keeps watch over them until they hatch in three to five days, while protecting them and fanning them with his fins, keeping them clean and providing them with oxygenated water. When they hatch, the fry remain near the nest for a few days, then leave to feed and fend for themselves. After the eggs have hatched, the male will often seek to attract another female to lay her eggs in his nest. Lepomis cyanellus typically live between 4 and 6 years in the wild.

Green sunfish tend to nest in areas close to other green sunfish, as well as other species of sunfish. Due to the close proximity of multiple nests, a green sunfish female may deposit some of her eggs into the nest of a male of a different species. This in turn leads to the next generation containing some amount of hybrids. These green sunfish hybrids will often look like a combination of their parents, often making it difficult to distinguish one species from another.

The green Sunfish is considered an invasive species in the state of Florida and New Jersey. In New Jersey anglers must destroy them, and not release them. They are illegal to possess without a valid permit on research or exhibition by a public agency such as an aquarium or research facility.

The IGFA all tackle world record for the species stands at 0.96kg (2lb 2oz) caught from Stockton Lake in Missouri in 1971.

All content from Kiddle encyclopedia articles (including the article images and facts) can be freely used under Attribution-ShareAlike license, unless stated otherwise. Cite this article:
Green sunfish Facts for Kids. Kiddle Encyclopedia.