The Pacific Tree Frog (Pseudacris regilla) is a species of tree frogs. They live in the West Coast of the United States. These include California, Oregon and Washington state. They also live in British Columbia and Canada. They live on the ground, but some have been found living in places 10,000 feet above sea level. They are the only frogs to make a "rabbit" sound. They are either green or brown. They can also change their colors. 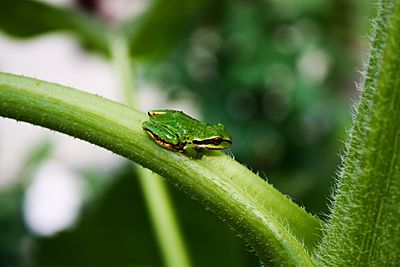 The Pacific tree frog grows up to 2 inches from snout to urostyle. The males are usually smaller than the females and have a dark patch on their throats. The dark patch is the vocal sac, which stretches out when the male is calling. Pacific tree frogs can be a number of different colors, including green, tan, reddish, gray, brown, cream, and black, but most are a shade of green or brown, with pale or white bellies.

They have a variety of dark and spotty markings on their backs and sides and can be identified by a black or dark brown eye stripe that stretches from the nose, across the eye, and back to the shoulder. They can change color seasonally to better match their environments. Their skin is covered in small bumps.

They have long legs compared to their bodies and they tend to be slender. Their toes are long and only very slightly webbed. On the end of each toe is a round, sticky toe pad or disk used for climbing and sticking to surfaces. Males also have an extra, and far less noticeable toe on their outer thumbs used exclusively in amplexus. Fertilization is external.

Pacific tree frogs are common on the Pacific coast of Oregon and Washington, but they are found from extreme northern California to British Columbia. They can also be found in Idaho. A small population also exists in a pond on Revillagigedo Island near Ketchikan, Alaska, having been intentionally introduced there in the 1960s.

They are found upland in ponds, streams, lakes and sometimes even further away from water; their habitat includes a wide variety of climate and vegetation from sea level to high altitudes. The Pacific tree frog makes its home in riparian habitat, as well as woodlands, grassland, chaparral, pasture land, and even urban areas including back yard ponds. Eggs of the Pacific tree frog may be consumed by the rough-skinned newt and other amphibians.

The Pacific tree frog begins mating in early winter to early spring. Since these frogs are so widespread geographically, their breeding season is thought to be determined by local conditions. When it is time, the males migrate to the water. They then make a call at the same time, calling "ooh-yeeh" or ribbiting loudly. This lures the females to the water and they mate.

The females lay their eggs in clumps of 10-90, and usually put them on and under vegetation and leaf litter in the pond. Females usually lay their eggs in shallow, calm water that has little action around it. If they survive, embryos will hatch into tadpoles within one to three weeks. The tadpoles feed on periphyton, filamentous algae, diatoms, and pollen in or on the surface of the water. They feed using suction, and a beak-like structure that helps scrape vegetation off surfaces.

The species attracts mates using a choral song. Males call to females as loudly as possible and produce a croak so loud that they sound as though they are produced by multiple males. These sounds can be heard by numerous females. Breeding takes place at night, near shallow water, typically after rainfall.

Metamorphosis usually follows about two to two and a half months later, but experience raising these tadpoles shows that some may delay metamorphosis, changing up to five months after hatching. The survival rate of these delayed metamorphs is lower, and the evolutionary utility of this delayed metamorphosis is uncertain. It may be related to the prevalence of fire in their natural ecosystem.

During the final stages of transformation when the tadpoles have four limbs and a tail, they stop feeding for a short time while their mouths widen and their digestive systems adjust from herbivorous to carnivorous.

For the most part, Pacific tree frogs are nocturnal, but they have been spotted during the day. These frogs spend a lot of time hiding under rotten logs, rocks, long grasses, and leaf litter, where they are very difficult to see unless they move. When they hunt, their toe pads allow them to climb on vegetation and other surfaces where they are to ambush their prey. Much of their diets consists of spiders, beetles, flies, ants, and other insects and arthropods; they can and do eat insects that are almost as large as they are, and will expand their bodies slightly to accommodate these meals.

Pacific tree frogs mature quickly, and are usually mate the season after metamorphosis. Predators include snakes, raccoons, herons, egrets, and other small mammals and reptiles.

When they sense potential food nearby, they commonly twitch a toe to attract it within easy reach of their tongues. They can live up to 9 years in captivity.

They produce several call types. These include the males' advertisement call, commonly described as “ribbit” or “crek-ek”, as well as an encounter trill call. The cre-ek call can be quite loud and can thus be heard from very far away. Males also produce a “dry land call”, a long cre-ee-ee-eeek, that can be heard anytime in the year except during the coldest and driest periods. Pacific tree frogs are the most commonly heard frogs along much of the West Coast of the United States.

These frogs have the ability to change color from brown to green. Previously, adults were thought to occur in two different fixed colors. Now, some of them have been found to be able to change between the two. They can also change from lighter to darker, shift from patterned markings to pure colors and vice versa, and even display combinations of colors, brown/green being the most frequent.

These color-changing morphs are triggered not by color change in their environments, but a change in background brightness. This type of environmental change would be caused by seasonal fluctuation. A full change in the dorsal coloration of a color morph can take from weeks to months, but initial changes can occur in just a few hours. This has been shown to be a very useful cryptic survival feature for these frogs.

Skin color is produced via pigment cells called chromatophores. Three types of chromatophores are commonly found in amphibians: Xanthophores, which contain yellow, orange, or red pigments and are found uppermost on the dermis; iridophores, which lie below the xanthophores and function by reflecting and scattering white light up through them (in the case of Pseudacris regilla and many other North American frogs, iridophores reflect blue light through the yellow pigment cells above to create a green frog) and melanophores, which are the deepest pigment cells and are responsible for the presence of black and brown pigments.

A rare, recessive "blue morph" is known. One is housed at the Humboldt State University Natural History Museum in Arcata, California. This mutation might inhibit the xanthophores' ability to produce yellow pigments, thus the normally green frog (possibly of the color-unchanging type) appears blue.

Research was done on Pacific tree frogs to discover if they have homing instincts and what was their main source for knowing where their home was. To find the answer, these frogs were marked and moved 300 yards away from their pond. Several days later, the researchers did a recapture on the original pond in which 66.3% of the frogs were recaptured, indicating there was some source of homing instinct. This was made apparent again when 24 frogs were placed into a larger pond, and 20 of those frogs returned to their original pond. The frogs' movement patterns and olfactory, auditory, and kinesthetic senses could be explanations for the homing, but not a single factor was able to explain the results, indicating that these frogs might be using all or a combination of these factors for homing.

All content from Kiddle encyclopedia articles (including the article images and facts) can be freely used under Attribution-ShareAlike license, unless stated otherwise. Cite this article:
Pacific tree frog Facts for Kids. Kiddle Encyclopedia.