Hylidae is a family of tree frogs. Some of the Hylids are semi-aquatic while others will be territorial frogs.

Most hylids has forward-facing eyes that gives them binocular vision. These hylids are arboreal species. Non-aboreal species do not have any of these advantages. The Cyclorana species are burrowing frogs. They spend most of their time underground. Hylids will eat on insects and other invertebrates. Larger species can eat small vertebrates. 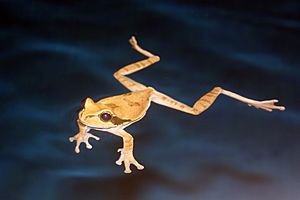 The European tree frog (Hyla arborea) lives in middle and Southern Europe. They can also be found in Asia and North Africa. These species are noisy during a rain storm. In North America, there are many species of the Hylidae family. These include Hyla versicolor (Grey Tree Frog) and the Hyla cinerea (American Green Tree Frog). The spring peeper (Pseudacris crucifer) can also be found in Eastern United States. The spring peeper will make loud noises during the spring and summer time. 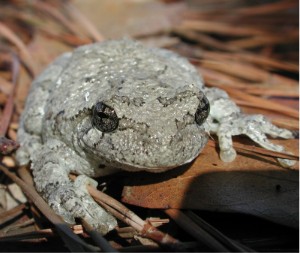 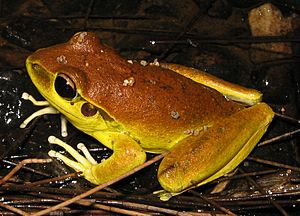 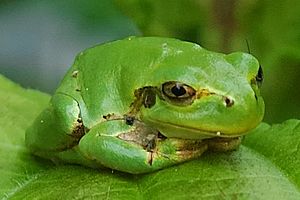 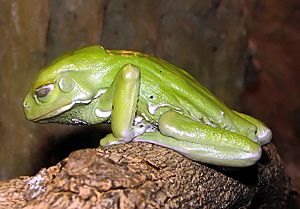 The Hylidae family is divided into the following subfamilies and genera:

All content from Kiddle encyclopedia articles (including the article images and facts) can be freely used under Attribution-ShareAlike license, unless stated otherwise. Cite this article:
Hylidae Facts for Kids. Kiddle Encyclopedia.