The American green tree frog (Dryophytes cinereus) is a common species of New World tree frog belonging to the family Hylidae. A common backyard species, it is popular as a pet, and is the state amphibian of Georgia and Louisiana.

The frog is green, medium-sized, and up to 6 cm (2.5 in) long. Their bodies are usually green in shades ranging from bright yellowish-olive to lime green. The color can change depending on lighting or temperature. Small patches of gold or white may occur on the skin, and they may also have a white, pale yellow, or cream-colored lines running from their jaws or upper lips to their groins. They have smooth skin and large toe pads. Their abdomens are pale yellow to white. Males have wrinkled throats (indicating the vocal pouch) and are slightly smaller than females. 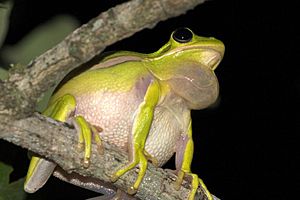 These frogs are found in the central and south-eastern United States, with a geographic range from the Eastern Shore of Maryland to southeast Florida, with populations as far west as central Texas, and as far north as Delaware and southern New Jersey. The frogs are considered monotypic, but clinal variation has been observed from Florida north along the Atlantic coastal plain. This may be attributed to the result of strong selection and/or drift.

Because these frogs are small and easily frightened, they often do not do well with frequent handling. Some specimens do seem to tolerate occasional handling, however, so handling frequency should be determined on an individual basis. The little frogs tend to be nocturnal, and in captivity they will be the most active once the lights are off. Males frequently call most of the year, especially after being misted in the tank. 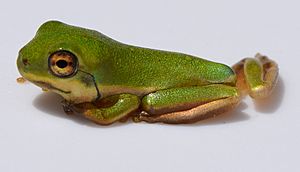 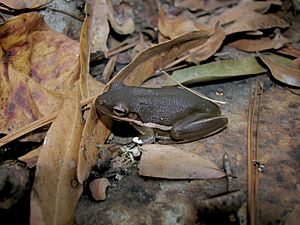 Most American green tree frog females breed once per year, but some have multiple clutches in a single mating season. In a Florida population, "advertisement calls of males were documented between March and September and pairs in amplexus were observed between April and August." In the Florida population, the average number of offspring in a single clutch was observed to be about 400 eggs. Eggs take between four and 14 days to hatch, with an average of five days. According to the Animal Diversity Web at the University of Michigan Museum of Zoology, "Female size was positively correlated with clutch size, but after the initial clutch, the number of eggs nearly always decreased."

Breeding is known to be strongly influenced by day length, temperature, and precipitation." While "the relative influence of these factors is not well understood," it is known as the frogs generally breed following rainfall, and males call more frequently as temperature and day length increase. Some evidence demonstrates the length of the breeding season length is correlated with latitude, with season length decreasing as latitude increases due to temperature limitations.

Males use a distinct advertisement call, "noticeably different than release or warning calls," to attract mates. Once a mate has been attracted, the pair begins amplexus, in which "the male tightly grasps onto the female to bring their cloacal openings close together for fertilization." Males are polygynous, generally seeking to mate with as many females as they can attract.

In southern Florida, the Cuban tree frog (Osteopilus septentrionalis) is an invasive species that has a similar call to the green tree frog in regards to timing and pitch. A study found that their calls compete acoustically with each other due to their similarity which limits communication space. In order to compete with the Cuban tree frog, green tree frogs modified their call to be shorter, louder, and more frequent so that potential mates have better chances of detecting the call.

American green tree frogs show no parental investment except for mating and egg-laying.

American green tree frogs are insectivores, usually consuming flies, mosquitoes, and other small insects such as crickets. One study suggested the frog selects prey not by its size, but according to its activity level, with the most active prey being the most frequently eaten. The same study showed "nearly 90% of Hyla cinerea prey were actively pursued," with the other 10% being "insects walking or close enough to be snatched up by the frog's tongue."

The frogs are popular pets because of their small size, appearance, and the undemanding conditions needed to take care of them. Unlike many amphibians, they do not require artificial heating. They need a large (at least ten-gallon) terrarium and do best with a substrate that will hold some humidity, such as commercial shredded bark or coconut husk bedding, or untreated topsoil on the floor of their terrarium. Tree frogs are arboreal, so the height on the tank is more important than the length. A variety of things for climbing, such as plants or branches, should be in the habitat. A shallow water dish should be included. Captive frogs should not be handled any more than necessary; when necessary, clean gloves should be worn.

The green tree frog became the state amphibian of Louisiana in 1993 and of Georgia in 2005.

All content from Kiddle encyclopedia articles (including the article images and facts) can be freely used under Attribution-ShareAlike license, unless stated otherwise. Cite this article:
American green tree frog Facts for Kids. Kiddle Encyclopedia.