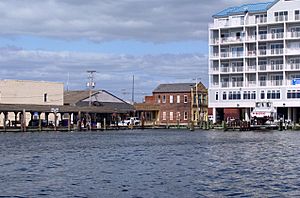 Crisfield, a major seafood center along the Chesapeake Bay

The Eastern Shore consists of nine Maryland counties on the Chesapeake Bay's eastern side—or eastern side of the Susquehanna River (the western border of Cecil County with Harford County. Pennsylvania borders across the Mason–Dixon line), with Delaware to the east and north, the Atlantic Ocean on the east, and Virginia's own Eastern Shore on the south. Maryland's and Virginia's Eastern Shore and all of Delaware form the Delmarva Peninsula.

The counties comprising the Eastern Shore are Caroline, Cecil, Dorchester, Kent, Queen Anne's, Somerset, Talbot, Wicomico, and Worcester counties. To the south, the Calvert-Scarborough Line separates Maryland from Virginia. A modern Worcester County highway map (PDF) shows this location. While comprising different boundaries than in the 17th-18th century, the Eastern Shore's geographic definition was set once everyone agreed on where Watkins Point—on the western side of the peninsula—is and where the Bay's shoreline began (since the bay side peters out into marshes and wetlands). 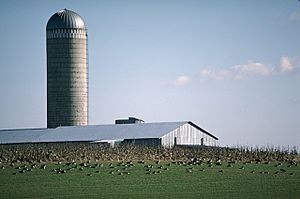 A farm in Kent County

The northern limit is harder to locate. Some dispute Cecil County as a true Shore territory due to I-95's presence with its surrounding developments, proximity to and influence from nearby urban areas like Philadelphia and Wilmington, and a position straddling the Elk River–leaving 50% west of the Shore.

Like New Castle County, Delaware, Cecil County is crossed by the fall line, a geologic division where the rockier highlands of the Piedmont region meet the Atlantic coastal plain, a flat, sandy area that forms the coast. The coastal plain includes the Delmarva Peninsula and hence the Eastern Shore of Maryland. The geology of Delmarva is an inseparable part of the Eastern Shore, which has few rocky outcrops south of Kent County.

The Chesapeake and Delaware Canal crosses from Back Creek on the Elk River to Port Penn, Delaware. While it was a shallow canal with locks after its construction in 1829, it was deepened in the early 20th century to sea level, and physically separates the Delmarva Peninsula from the rest of the United States. Maryland south of the canal is considered the Eastern Shore by residents. The term Western Shore is used by Eastern Shore residents to describe all the counties of Maryland west of the Chesapeake Bay, but especially those of the Baltimore-Washington metropolitan area and Southern Maryland. 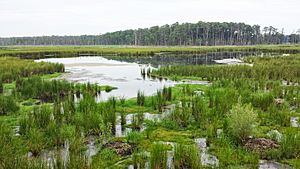 The north-south section of the Mason–Dixon line forms the border between Maryland and Delaware. The border was originally marked every mile by a stone, and every five miles by a "crownstone". The line is not quite due north and south, but is as straight as survey methods of the 1760s could make it. It was surveyed as a compromise solution to a century-long wrangle between the Penn and Calvert families of England. If the Chesapeake Bay/Delaware Bay watershed divide had been taken as the borderline, Delaware would be about half its current size.

Finally, although this has received less attention than other parts of Eastern Shore culture, commercial east-west ties between Delaware towns and Maryland towns were culturally significant in Colonial and Early American periods despite the border line (which largely cut through woods and swamps). Trade with Philadelphia was conducted by overland routes to Delaware towns like Odessa (then called Cantwell's Bridge) and Smyrna (then called Duck Creek). Agricultural products and milled grain were taken up the Delaware River by "shallop men" in small vessels called shallops. These cultural connections continue to this day.

Ocean City is a modern resort on what was once called the "seaside" or "seaboard side." It is on a long north-south sandspit that is essentially a barrier island. 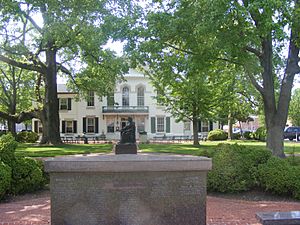 William Claiborne was granted land (part of the Colony of Virginia) in 1629 and named the land "Kent County". In 1631, he sailed north up the Chesapeake Bay from its south and west side to the area known today as Kent Island. There he made a fortified settlement that is considered to be the first English settlement within the Province of Maryland. Talbot County was formed in 1662. Cecil County was formed in 1674, by proclamation of the Governor, from eastern portions of Baltimore County and the northern portion of Kent County. Wicomico County was formed in 1867, as the 9th and last county, created from Somerset and Worcester counties.

Formation of the counties 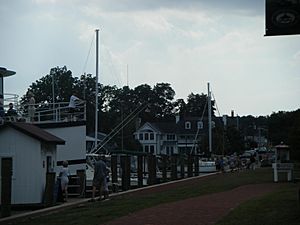 Ocean City was founded on July 4, 1875, when the Atlantic Hotel opened on Assateague Island. At the time, Assateague Island was continuous from the Delaware state line to well south of Ocean City: the Ocean City Inlet was not formed until a hurricane in August 1933 cut across the south end of the town, although the inlet was cut not by waves sweeping inland, but by 4 or 5 days' worth of freshwater runoff from the coastal creeks running seaward. By 1935, government money had built jetties to make the inlet permanent, dividing Fenwick Island (north) from Assateague Island (south). Early transportation to the island was by train.

Until the 1820s, travel and commerce between the Eastern Shore and Baltimore were less important than the connections between it and Philadelphia. Water travel by sailboat and steamer linked the Eastern Shore to Baltimore more tightly beginning about 1813, when the first steamboat traveled the Bay. By the 1880s, railroad lines linked the Eastern Shore to Philadelphia and later, Norfolk, Virginia, by way of a railroad line straight south from Wilmington to Dover, Delmar, Salisbury, and Cape Charles. Maryland's Eastern Shore was served by branch lines running generally southwest from the main route. See List of railroad lines in the Delmarva Peninsula. The Eastern Shore's many branchlines were built after the Civil War by local companies; eventually all were controlled by the Pennsylvania Railroad (which also bought control of the steamboat and ferry routes), then Conrail, and now Norfolk Southern.

An east-west rail route ran from a ferry terminal at Claiborne, west of St. Michaels, to Ocean City, via the Baltimore and Eastern Shore Railroad and the Wicomico and Pocomoke Railroad. Travelers could also take a ferry to Love Point on Kent Island, board a Queen Anne's Railroad train, and travel east to Lewes and Rehoboth Beach, Delaware.

In the late 1950s and early 1960s developers began selling lots on Assateague Island, south of the inlet. However, a storm on March 6, 1962 destroyed houses, shacks, and roads. The state and federal governments intervened before reconstruction by creating the Assateague Island National Seashore and Assateague State Park.

An Eastern Shore Baseball League operated on three different occasions between 1922 and 1949. It was a Class D minor league with teams in all three states of Delmarva.

During the epidemic of HIV/AIDS in the United States, Baltimore City Health Department official Robert Mehl persuaded the city's mayor to form a committee to address food problems; the Baltimore-based charity Moveable Feast grew out of this initiative in 1990. By 2010, the organization's region of service had expanded from merely Baltimore to include all of the Eastern Shore of Maryland.

Although the Eastern Shore comprises more than a third of Maryland's land area, it has a population of 420,792 (2004 census estimate), about 8% of Maryland's population.

As a whole the Eastern Shore is considerably more conservative than the more-populated Western Shore. The region has a history of strongly supporting Republican candidates for governor. Republicans Ellen Sauerbrey in 1994 and 1998, Bob Ehrlich in 2002, 2006 and 2010 and Larry Hogan in 2014 swept all nine counties.

At the presidential level, the Eastern Shore also leans Republican, although Kent and Somerset Counties have flipped back and forth for Democratic and Republican presidential candidates. The last Democrat to win Dorchester County was Bill Clinton in 1996; Cecil County has not gone Democratic since Jimmy Carter won the county in 1976, whilst Queen Anne’s, Caroline, Talbot, Wicomico and Worcester Counties have voted Republican at every election subsequent to Lyndon Johnson’s landslide.

The Eastern Shore has long been a part of Maryland's 1st Congressional district. Democrat Roy Dyson represented the 1st district from 1981 until he was defeated by Republican Wayne Gilchrest in 1990. Gilchrest held the seat until 2008 when State Senator Andy Harris defeated him in the Republican primary. Harris narrowly lost the subsequent general election to Democratic Queen Anne's County state's attorney Frank Kratovil. In 2010, Harris again ran for the district and handily defeated Kratovil after a single term in office. Harris had held the seat without serious difficulty since.

In the Maryland General Assembly, the Eastern Shore encompasses a portion of district 35B and all of districts 35A, 36, 37A and 37B, 38A, 38B and 38C. All seats are held by Republicans except for state delegate in district 37A and state senator in district 38.

Various waterways provide a medium for commerce and boaters: the Atlantic Ocean; Chesapeake Bay; the Susquehanna River; and the Chesapeake and Delaware Canal. 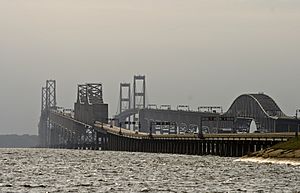 The Chesapeake Bay Bridge, which connects the Eastern Shore with the Baltimore-Washington area and the rest of Maryland

There are three major routes onto the Shore:

The two major highways on the Eastern Shore are U.S. Route 13 and U.S. Route 50, which meet in Salisbury.

The Salisbury-Ocean City Wicomico Regional Airport, in Salisbury, is the only commercial airport on the Delmarva Peninsula.

Airports for private planes include:

The Eastern Shore has made several attempts to separate from Maryland. Proposals were debated in Maryland's General Assembly in 1833–1835, 1852, and 1998. There were earlier proposals visualizing a state encompassing the Delmarva Peninsula. The 1998 proposal by state Senators Richard F. Colburn and J. Lowell Stoltzfus did not specify a status for Eastern Shore's nine counties following secession, but suggested the new state's name could be "Delmarva".

Easton hosts a three-day artist event, the Waterfowl Festival, every November. Duck and goose hunting from blinds is a popular activity using carved wooden duck decoys, which can also be prized works of art.

The 2005 film Wedding Crashers was filmed on locations at Maryland's Eastern Shore, including the historic Inn at Perry Cabin.

The Octavia Butler novel Kindred, which uses the science fiction concept of time travel to explore slavery in the United States, is partially set in Maryland's Eastern Shore.

"Chesapeake" is a novel by James A. Michener, published by Random House in 1978. The story deals with several families living in the Chesapeake Bay area, from 1583 to 1978.

All content from Kiddle encyclopedia articles (including the article images and facts) can be freely used under Attribution-ShareAlike license, unless stated otherwise. Cite this article:
Eastern Shore of Maryland Facts for Kids. Kiddle Encyclopedia.