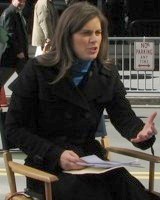 Erin Isabelle Burnett (born July 2, 1976 in Mardela Springs, Maryland) is an American news anchor and journalist. She has also done reporting at NBC. Since 2011, Burnett has been the host of Erin Burnett OutFront on CNN.

All content from Kiddle encyclopedia articles (including the article images and facts) can be freely used under Attribution-ShareAlike license, unless stated otherwise. Cite this article:
Erin Burnett Facts for Kids. Kiddle Encyclopedia.