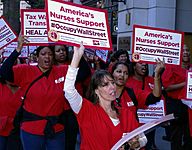 Occupy Wall Street is a protest that started in 2011 in New York City and spread into other cities all over the United States. People protest against how poor and wealthy people have lived in different ways and are treated differently by other people, and also against the way corporations use the money that they have. People in New York started protesting in Zuccotti Park on September 17, and some people decided to camp there overnight. It has grown to include several thousand people, with many different political views. Protesters include some communists, political moderates, liberals, conservatives, and libertarians.

Many of the Occupy protests in the rest of the country only started as in the middle of October. In some places, like Denver, Oakland, and New York City itself, police have acted violently. In places like Miami, the protests have been peaceful and some police officers have supported the protests.

All content from Kiddle encyclopedia articles (including the article images and facts) can be freely used under Attribution-ShareAlike license, unless stated otherwise. Cite this article:
Occupy Wall Street Facts for Kids. Kiddle Encyclopedia.