Salisbury is a city in and the county seat of Wicomico County, Maryland, United States, and the largest city in the state's Eastern Shore region. The population was 30,343 at the 2010 census. Salisbury is the principal city of the Salisbury, Maryland-Delaware Metropolitan Statistical Area. The city is the commercial hub of the Delmarva Peninsula, which was long devoted to agriculture and had a southern culture. It calls itself "The Comfortable Side of Coastal". 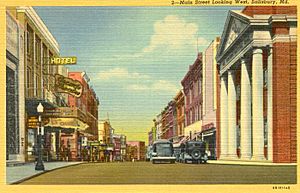 Salisbury's location at the head of Wicomico River was a major factor in growth. At first it was a small colonial outpost set up by Lord Baltimore.

Salisbury's location at the head of the Wicomico River was seen to be a convenient location for trading purposes. Due to the similar physical attributes as well as the nationality of Salisbury's founders, many historians believe that the name was inspired from the City of Salisbury, England, an ancient cathedral city.

Salisbury also had a role in the Civil War, as it served as a location where Union forces encamp in order to search for sympathizers from the South. These Union forces also worked to inhibit the movement of contraband to Confederate forces in the South.

Disaster struck Salisbury in both 1860 and 1866, as fires burned through two thirds of the Town. Although met with adversity, the resolve of the people of Salisbury was unshaken as the county in which Salisbury was located in continued to grow, and Salisbury was considered to be the heart, or major town, of the county.

In 1867, when the Wicomico County was formed out of parts of both Somerset and Worcester Counties, Salisbury became the government seat.

Adding to the diversity of Salisbury, the City is host to a wide variety of events celebrating local culture and the arts. These events include 3rd Friday, an event held in downtown Salisbury on the third Friday of each month, celebrating local music, artists, and non profit organizations and 1st Saturday, another arts and music event held downtown on the First Saturday of the month.

Salisbury is also home to a City Park: The Salisbury Zoo, the Centre at Salisbury Mall, and the Wicomico Youth & Civic Center (Civic Center Website here). 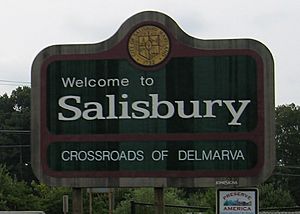 Salisbury's location on the Atlantic Coastal Plain in Maryland gives it a humid subtropical climate, with hot, humid summers and, on average, cool to mild winters. However, in winter the area is also subject to some intervening periods of much more intense cold and even occasional blizzards usually characteristic of more northern regions. The monthly daily average temperature ranges from 37.9 °F (3.3 °C) in January to 78.6 °F (25.9 °C) in July; there are 22 days of 90 °F (32 °C)+ highs annually and 5.6 days where the high fails to rise above freezing. On average, Salisbury annually receives 45.9 inches (1,170 mm) of precipitation, with 9.9 inches (25.1 cm) of snowfall. The Köppen climate classification subtype for this climate is "Cfa" (Humid Subtropical Climate).

Salisbury is the principal city of the Salisbury, Maryland-Delaware Metropolitan Statistical Area, which consists of Somerset, Wicomico, and Worcester counties in Maryland and Sussex County in Delaware.

There were 11,983 households, of which 29.1% had children under the age of 18 living with them, 26.4% were married couples living together, 19.1% had a female householder with no husband present, 5.0% had a male householder with no wife present, and 49.6% were non-families. 32.5% of all households were made up of individuals, and 12% had someone living alone who was 65 years of age or older. The average household size was 2.42 and the average family size was 3.04. 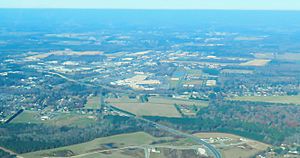 According to the US Conference of Mayors, the Salisbury MD-DE Metropolitan Statistical Area had the 42nd fastest rate of job growth in the nation in 2015. This is the fastest growing US metropolitan area east of the Missouri River and north of the Research Triangle.

Perdue Farms, a multi-national poultry corporation, is headquartered in Salisbury. Other industries in Salisbury include electronic component manufacturing, pharmaceuticals, shipbuilding, and agriculture.

Some of the major employers in Salisbury include: Salisbury University, Verizon, Peninsula Regional Medical Center, The Knowland Group and Pepsi Bottling of Delmarva. Peninsula Regional Medical Center employs more Salisbury residents than any other company, while Perdue Farms is the largest employer headquartered in Salisbury (with nearly 22,000 employees). The labor market within 15 miles (24 km) of Salisbury is 85,000, and at a 30-mile (48 km) radius 101,000 people.

Piedmont Airlines, a regional airline, is headquartered in unincorporated Wicomico County, on the grounds of Salisbury-Ocean City Wicomico Regional Airport near Salisbury. 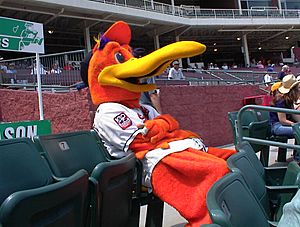 Delmarva Shorebirds' mascot, Sherman, in the seats of Perdue Stadium.

Salisbury has a rich history of supporting baseball. The Eastern Shore Baseball League was headquartered there; two franchises—the Salisbury Cardinals and the Salisbury Indians—called the city home. Today, the Delmarva Shorebirds represent the town in the South Atlantic League. The Eastern Shore Baseball Hall of Fame is housed at the Arthur W. Perdue Stadium. The Shorebirds are a Single-A Affiliate of the Baltimore Orioles.

With the Wicomico Youth & Civic Center recently ending its ban on sales, Salisbury is rumored to be a future destination for a Federal Hockey League expansion team.

Salisbury is served by two major highways—U.S. Route 13, one of the major north–south routes of the Delmarva Peninsula, and U.S. Route 50, one of the major east–west routes on the peninsula. US 13 connects Salisbury to Dover, Delaware and Norfolk, Virginia and is known as the Ocean Highway, while US 50 serves as the main route between the Baltimore/Washington region and many of the major cities on Delmarva, including Ocean City; it is known as the Ocean Gateway. US 13 and US 50 originally passed through the central business district, but have been subsequently rerouted onto the Salisbury Bypass, a 3/4 beltway around the city that allows through traffic on US 13 and US 50 to bypass the downtown area; earlier routes of both highways are now U.S. Route 13 Business and U.S. Route 50 Business. Earlier still, US 13 was routed along Division Street and US 50 along Main Street.

The city is served by daily scheduled American Eagle service to both Philadelphia, Pennsylvania and Charlotte, North Carolina at the Wicomico Regional Airport. Additionally, the Port of Salisbury offers respite for recreational boaters and commercial tug boats. Salisbury's navigable stop on the Wicomico River is the second largest and second busiest commercial port in Maryland.

The city is also served by Shore Transit, which provides local bus service throughout the city, and also services points outside the city within the tri-county area, such as Ocean City's public transportation system. The major transfer point is on Calvert Street, in downtown Salisbury.

Public schools are under the jurisdiction of Wicomico County Public Schools. Several private institutions maintain academic programs within the city.

All content from Kiddle encyclopedia articles (including the article images and facts) can be freely used under Attribution-ShareAlike license, unless stated otherwise. Cite this article:
Salisbury, Maryland Facts for Kids. Kiddle Encyclopedia.