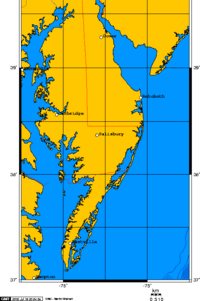 The Delmarva Peninsula is a large peninsula on the East Coast of the United States, made up by parts of three U.S. states: Delaware, Maryland, and Virginia. Named as a portmanteau of the letters of the states that occupy it, it is almost 300 by 100 km or about 180 by 60 miles, and is bordered by the Chesapeake Bay on the west, and the Delaware River, Delaware Bay, and Atlantic Ocean on the east.

All content from Kiddle encyclopedia articles (including the article images and facts) can be freely used under Attribution-ShareAlike license, unless stated otherwise. Cite this article:
Delmarva Peninsula Facts for Kids. Kiddle Encyclopedia.