Wicomico County is located in the southeastern part of the U.S. state of Maryland, on the Delmarva Peninsula. As of the 2010 census, the population was 98,733. The county seat is Salisbury. The county was named for the Wicomico River, which in turn derives from Algonquian language words wicko mekee, meaning "a place where houses are built," apparently referring to a Native American town on the banks.

The newspaper of record is The Daily Times.

Wicomico County was created from Somerset and Worcester counties in 1867.

The county's boundary with Delaware is composed of the Mason-Dixon line and the Transpeninsular Line. The intersection of these two historical lines is the midpoint of the Transpeninsular Line, fixed by Mason and Dixon between 1763 and 1767. The midpoint is located about 8 miles (13 km) northwest of Salisbury, near the center of the Delmarva Peninsula. The county is generally flat, characteristic of the region, with a few small hills in the northeast. The lowest elevation is at sea level and the highest elevation is 98 ft (30 m). 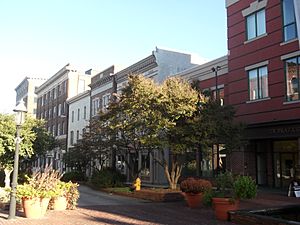 Other industries in Wicomico County include electronic component manufacturing, pharmaceuticals, shipbuilding, and agriculture.

All content from Kiddle encyclopedia articles (including the article images and facts) can be freely used under Attribution-ShareAlike license, unless stated otherwise. Cite this article:
Wicomico County, Maryland Facts for Kids. Kiddle Encyclopedia.