Kids Encyclopedia Facts
"Harford County" redirects here. It is not to be confused with Hartford County, Connecticut.

Harford County was formed in 1773 from the eastern part of Baltimore County. It contains Tudor Hall, birthplace of Abraham Lincoln's assassin, John Wilkes Booth. Harford County also hosted the signers of the Bush Declaration, a precursor document to the American Revolution.

The county was named for Henry Harford (ca. 1759–1834), the illegitimate son of Frederick Calvert, 6th Baron Baltimore. Henry Harford was born to Calvert's mistress, Hester Whelan, whose residence still stands as part of a private residence on Jarretsville Pike, in Phoenix, Maryland. Harford served as the last Proprietary Governor of Maryland but, because of his illegitimacy, did not inherit his father's title.

Havre de Grace, an incorporated city in Harford County, was once under consideration to be the capital of the United States rather than Washington, D.C.. It was favored for its strategic location at the top of the Chesapeake Bay; this location would facilitate trade while being secure in time of war. Today, the waterways around Havre de Grace have become adversely affected by silt runoff, which is one of the primary environmental issues of Harford County.

The county's past, present, and future population booms and land development activities have created conflicts between farmers and developers/homeowners wishing to create subdivisions. The county was one of the first in the country to implement a development envelope plan, in which new development is channeled into specific areas of the county.

Because the county sits at the headwaters of the Chesapeake Bay along the Susquehanna River, it plays a key role in controlling sediment and fertilizer runoff into the bay as well as fostering submerged aquatic vegetation (SAV) regrowth. The county has had to balance the needs of land owners to practice agriculture and/or pave land (creating impervious surfaces) with effects of runoff into the bay.

Harford County has been burdened by soil contamination and groundwater contamination since the creation of the Aberdeen Proving Ground. The military installation performs research for the U.S. Army and has released various chemical agents into soil and groundwater, including mustard gas and perchlorate. The bordering towns of Aberdeen, Edgewood and Joppatowne have been affected by this contamination. Aberdeen Proving Ground contains three Superfund priority sites as of 2006[update]. Groundwater contamination by MTBE, a mandatory gasoline additive, has also affected Fallston.

Harford County also faces controversy from residents living near Scarboro Landfill and Harford Waste Disposal Center, the only municipal landfill. The landfill, approved to triple in size in 2007, is the subject of complaints by neighbors of operating violations, such as large areas of open trash and blown litter, leachate breaks which contaminate area residential wells and flow into Deer Creek, a tributary of the Susquehanna River, and increased health problems.

Harford County straddles the border between the rolling hills of the Piedmont Plateau and the flatlands of the Atlantic Coastal Plain along the Chesapeake Bay and its tributaries. The county's development is a mix of rural and suburban, with denser development in the larger towns of Aberdeen and Bel Air and along Route 40 and other major arteries leading out of Baltimore. The highest elevations are in the north and northwest of the county, reaching 805 ft. near the Pennsylvania border in the county's northwestern corner. The lowest elevation is sea level along the Chesapeake Bay.

The Susquehanna Symphony Orchestra, formerly the Harford Community Orchestra, is an orchestra that is based in Harford County. The group is made up of about 80 musicians from many professions.

The Havre De Grace Decoy Museum is a museum dedicated to working and decorative decoys used on the Chesapeake Bay.

Harford Community College hosts many cultural spots. The Student Center hosts the Chesapeake Gallery, a collection of artwork from established artists, as well as students and faculty, and the Chesapeake Theater, a theater venue used by the Phoenix Festival Theater Company, a student run theater group.

Harford Community College also has the Joppa Hall, which houses the Blackbox Theatre, an additional theater venue used by the Harford Dance Theater Company and the HCC Actors Guild. The Joppa Hall also houses the Joppa Recital Halls, a venue for musical performances.

Also at HCC is the Hays-Heighe House, a museum dedicated to the history of Harford County.

The Historical Society of Harford County, one of the oldest county historical societies in Maryland, was established in 1885 to preserve, promote, and interpret the history of the county and its people. Today, it is headquartered on Main Street in downtown Bel Air in the historic 1937 Old Bel Air Post Office Building, where it maintains an archive, exhibit space, and research library.

The Conowingo Dam is on the eastern border of Harford County. 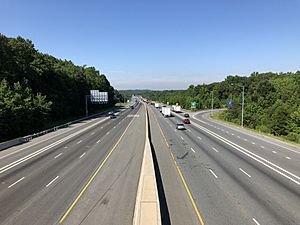 The Harford County Airport is a small airport in Churchville. Its available for recreational pilots & flight training, as well as sight seeing, balloon rides, hang gliding and sky diving.

The Conowingo Dam is on the eastern border of Harford County; the dam operations and offices are on the Harford County side of the river.

Many scenes from the films Tuck Everlasting and From Within, and the U.S. TV series House of Cards were filmed in various places around Harford County.

According to the Maryland Department of Business and Economic Development, the following were the top employers in Harford County:

There are no 4-year universities in Harford County. Harford Community College, located in Churchville, offers 2-year associate degrees and vocational programs. Recently, Harford County Community College has entered into several partnerships with local four-year colleges for enhanced offerings, for credit at those institutions, to be taught on campus and at the surrounding buildings.

All content from Kiddle encyclopedia articles (including the article images and facts) can be freely used under Attribution-ShareAlike license, unless stated otherwise. Cite this article:
Harford County, Maryland Facts for Kids. Kiddle Encyclopedia.