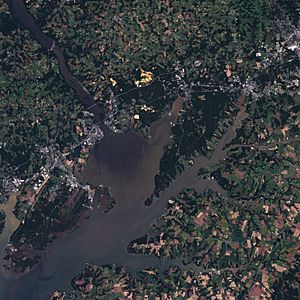 Satellite image of Chesapeake Bay where the Susquehanna River empties into it. The cities of Havre de Grace, Maryland (southwest bank) and Perryville, Maryland (northeast bank).

Havre de Grace, abbreviated HdG, is a city in Harford County, Maryland, United States, situated at the mouth of the Susquehanna River and the head of Chesapeake Bay. It is named after the port city of Le Havre, France, which in full was once Le Havre de Grâce (French, "Harbor of Grace"). 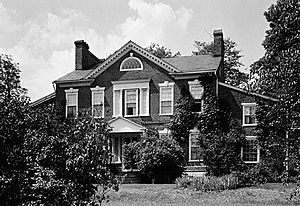 During the Revolutionary War, the small hamlet known as Harmer's Town was visited several times by General Lafayette, considered a hero of the war. He commented that the area reminded him of the French seaport of Le Havre, which had originally been named Le Havre-de-Grâce. Inspired by Lafayette's comments, the residents incorporated the town as Havre de Grace in 1785.

George Washington stayed overnight in the town in 1789 on the journey to New York City for his first inauguration. During the First Congress in 1789, Havre de Grace missed by only one vote being named the capital of the fledgling United States.

On May 3, 1813, during the War of 1812, Havre de Grace was attacked by British Rear Admiral George Cockburn who burned and plundered the city. The American Lieutenant John O'Neill single-handedly manned a cannon to help defend the town. He was wounded, captured by the British, and soon released. In gratitude, Havre de Grace made O'Neill and his descendants the hereditary keepers of the Concord Point lighthouse marking the mouth of the Susquehanna River.

The early industry of Havre de Grace included oyster and crab harvesting, and extensive fruit orchards. Products were shipped to markets along the East Coast and upriver.

The town was the southern terminus for the Proprietors of the Susquehanna Canal and later the Susquehanna and Tidewater Canal, which bypassed difficult navigational areas of the lower Susquehanna River between Havre de Grace and Wrightsville, Pennsylvania, where it connected to the Pennsylvania Canal. It was built between 1836 and 1840, but operations on the canal declined after 1855 because of competition from railroads, which could carry freight more quickly. The Lock Keeper's house and remnants of the canal exist today as a museum.

Havre de Grace was a primary town on the Eastern Route of the Underground Railroad in Maryland, as slaves could cross the Susquehanna to havens in the free state of Pennsylvania, traveling on to Philadelphia and New York. Prior to 1840, escaped slaves from communities along the western shore of the Chesapeake Bay came to Havre de Grace and often took the ferry across the Susquehanna River to safe sites in Lancaster and Chester counties in Pennsylvania. When "vigilance increased at the ferry", slaves were guided upriver to cross from Columbia, which had been established by Quakers. The town's different transportation routes enabled slaves to make their way to safe haven in the North.

Havre de Grace became known for duck hunting, and was a seasonal destination for hunters. They stayed at the town hotels and hired local guides to escort them hunting on the river and along the bay. Local artisans became known for their high quality decoy making, which is honored in the Decoy Museum of the city.

By the 1860s, a large population of free African Americans had settled in the town, as its concentration supported independent artisans, as well as jobs associated with shipping on the river and canal and, increasingly, with the railroads. The town was one of seven sites for the recruiting of "U.S. Colored Troops" during the American Civil War. Although in the tidewater area of Harford County, which had large plantations and slaveholders, the city's river and canals tied it to northern industry and trade in Pennsylvania and beyond. These provided urban jobs for free blacks, and the town had a strong proportion of Northern sympathizers among whites as well.

In 1878, the town became a city and established its own government.

Shortly after 1878, Stephen J. Seneca opened a fruit-packing factory in the S. J. Seneca Warehouse with a tin can factory next to Havre de Grace Waterfront. Seneca made improvements to canning with his patents; 1889 Can-soldering machine 1891 Can-soldering machine By 1899, Seneca had become a canned goods broker. Since the original railroad had run down St. Clair Street (now Pennington Ave.) to the river the location of the factory was advantageous for both water and rail shipping. Up until the Second World War many farmers in Harford County brought their produce to the Seneca Factory later run as Stockhams Cannery. S.J. Seneca lived at 200 North Union Ave. was Mayor of Havre de Grace 1893-1894 and donated the Methodist Church.

The Seneca cannery, which is currently in use as an antique shop, is a very good example of a late 19th century brick industrial building. with its severally classical facade and massive stone buttresses on the rear. 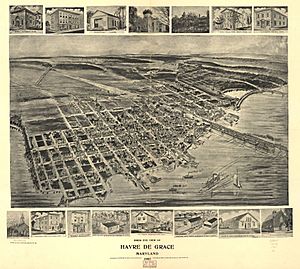 Havre de Grace was known as "The Graw" from 1912 through the 1950s, and it prospered as a stop for travelers. These included gangsters and gamblers en route to New York City from the South following the "pony routes". The Havre de Grace Racetrack operated from 1912 to 1950. Al Capone was reported to have spent some time at the former "Chesapeake Hotel" (now known as "Backfin Blues; Creole de Graw"). At the end of the 1950s, the state removed the horse track, and its race and betting rights were bought by the Pimlico Race Course in Baltimore.

An incident during 1949, when the city denied a license to use a city park and arrested a Jehovah's Witnesses preacher, led to the US Supreme Court case of Niemotko v. Maryland (1951). The court ruled that Jehovah's Witnesses were protected by constitutional rights to the free exercise of religion and the city should have granted them the permit to speak in the park.

A few tenant farmhouses remain from the large Mitchel plantation that overlooked the city. In the 1980s, Havre de Grace began to undergo extensive redevelopment, with renovation of historic properties and adaptation for new uses, as well as construction of new houses and townhouse communities on former farmland. It was becoming a destination for people with second homes for vacations on the bay and retirees. Historic lands and older forests are being cleared, and expensive houses are now extending and growing along Chapel Road northwest towards Webster Village. The city has benefited through development of new properties, antique stories and retail venues since the late 20th century.

In September 2003, Hurricane Isabel destroyed the promenade and flooded the city about 2 blocks into downtown. In 2004, with very strong efforts from Americorps NCCC, the promenade was reconstructed. It serves as a waterfront boardwalk and nature walk from Tydings Park to the Maritime Museum, and on to Concord Point Lighthouse.

Havre de Grace is a small city, which has recently expanded by annexing land. Housing development is moderate but steady. Per capita income has doubled over the 1990-2000 era, with the arrival of wealthier residents to the newer suburban projects around and in the city. Some commute to jobs elsewhere; others are retirees. New suburban developments since the 1990s have brought thousands of middle-to-upper-class residents to the town. As a result, many working-class citizens who used to live in the city have relocated due to rising land values and changing neighborhoods. Havre de Grace has recently grown related to the BRAC activities of the Department of Defense. DOD recently relocated activities and personnel from various bases to the Aberdeen Proving Ground (APG), a few miles away.

The climate in this area is characterized by hot, humid summers and generally mild to cool winters. According to the Köppen Climate Classification system, Havre de Grace has a humid subtropical climate, abbreviated "Cfa" on climate maps.

Industries in Havre de Grace include leading global technology companies like EFC and Evonik as well as market leaders like Dunlop and Smuckers. 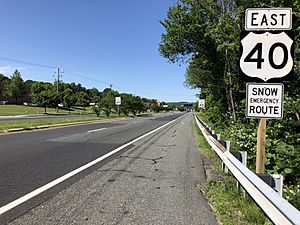 Two railroad mainlines pass through Havre de Grace. More than 80 daily passenger trains on Amtrak's busy Northeast Corridor speed through Havre de Grace at 90 miles per hour (145 km/h) on an elevated line for traversing the adjacent Susquehanna River Bridge. The double track bridge was built by the Pennsylvania Railroad between 1904 and 1906 for its New York City–Washington, D.C. line. The Philadelphia Subdivision of CSX Transportation, originally constructed by the Baltimore and Ohio Railroad, carries a heavy volume of freight. The CSX line crosses the river on the CSX Susquehanna River Bridge, rebuilt between 1907 and 1910, about 1 mile (1.6 km) upstream of the Amtrak bridge.

Havre de Grace's location at the head of the Chesapeake Bay and the mouth of the Susquehanna River makes it popular for recreation and tourism. There are marinas and service operators along the shore line. The city yacht basin and park sponsors various events each year. The restored promenade and boardwalk that runs along the shore from the Concord Point Lighthouse to the yacht basin is a favorite place for locals and tourists to walk and enjoy views of the bay.

In 1987, the central business district was added to the National Register of Historic Places as the Havre de Grace Historic District, which recognizes its architecture and historic fabric. A variety of museums help explain and interpret the city's rich maritime past and present: the Decoy Museum, the Havre de Grace Maritime Museum, Concord Point Lighthouse, the Lockhouse Museum, the Black Eyed Susan paddle steamer. Havre de Grace also claims a renovated seaplane port. The city has four public schools and Harford Memorial Hospital, the first to be established in Harford County.

A season four episode of the television show Boardwalk Empire was named for the city and partially took place there.

All content from Kiddle encyclopedia articles (including the article images and facts) can be freely used under Attribution-ShareAlike license, unless stated otherwise. Cite this article:
Havre de Grace, Maryland Facts for Kids. Kiddle Encyclopedia.