The Pennsylvania Canal (or sometimes Pennsylvania Canal system) was a complex system of transportation infrastructure improvements including canals, dams, locks, tow paths, aqueducts, and viaducts. The Canal and Works were constructed and assembled over several decades beginning in 1824, the year of the first enabling act and budget items. It should be understood the first use of any railway in North America was the year 1826, so the newspapers and the Pennsylvania Assembly of 1824 applied the term then to the proposed rights of way mainly for the canals of the Main Line of Public Works to be built across the southern part of Pennsylvania.

Enacted while railroads were in their infancy, the focus of the act was to create, via a canal system, the capability to ship heavy or bulk goods and connect Philadelphia to Pittsburgh and, more importantly, beyond to the new growth markets in the developing Northwest Territory reached by the Ohio River, now called the Midwest.

Later, when updated in 1837 to reflect the experience of twelve years of toddler-railways, the term was also applied to railroads and new canals to be added to the state transportation system. As a crowning achievement, the Main Line of Public Works and the Pennsylvania Canal system topped 2,100 feet (640 m) in elevation by erecting the Allegheny Portage Railroad, which used a system of five inclines and five planes on each side of the Eastern Continental Divide at Cresson Pass in Cambria County to actually haul wheeled flat cars, which had halved canal boats placed on them, up and over the Allegheny Front and connect Pittsburgh to the Susquehanna. When finished in 1834 the trip from Philadelphia to Pittsburgh could be made in 3–5 days, weather conditions depending.

The near west, in the fifty years before 1830 was but recently settled and steadily growing as people poured westwards along the various Emigrant Trails into the mid-west to destinations on a million new farms and towns throughout the watershed of the Mississippi Valley towards the lands organized in the Northwest Territory. The goal of the enabling acts was to enhance commerce and lower transportation costs between east and west, better joining the trans-Allegheny region to the eastern seaboard; this was a commercially motivated act with an eye towards servicing the growing markets of the new fast growing western settlements (Midwest) to the manufactories of the East.

Provision was made in the later legislation to tie in and even extend privately built canals such as the Lehigh Canal, not technically part of the Pennsylvania Canal system, and link them and the state's infant railroads to the public system and add to its value. The canal linking Philadelphia to the Susquehanna River, the proposed Pennsylvania Canal (Philadelphia to the Susquehanna to the Wright's Ferry landing at Columbia, Pennsylvania), was overtaken by technological events. Instead of pouring money into building a ditch, permission was sought by the investors to use its 82-mile (132 km) right of way to replace it in the "main line of works" scheme by a railway, a new developing technology which resulted in the Philadelphia & Columbia Railroad (1834). As they were built above ground, railways were easier and cheaper to build, since no ditches needed to be dug with human muscle power, nor did they require feed waters to be located and aqueducts built to provide them. The plan also included a visionary scheme to build a ramp system which would roll canal boats over the Allegheny Mountains at an elevation over 2,100 feet (640 m) through the broad uneven saddle of Cresson Pass.

Though most of the canals no longer have any function, some segments retain value as historic and recreational sites. Both the Delaware and the lower Lehigh Canal were kept busy into the tough financial years of the Great Depression. The right of way authorized for the Upper Lehigh Canal became an extension of the Lehigh and Susquehanna Railroad (LH&S), which the 1837 revised act had established to connect the Wyoming Valley to the Delaware River navigations; the railway would eventually parallel the entire Lehigh Canal operated by its parent LHC&N. The route from Philadelphia to Wilkes-Barre over the Lehigh and LH&S or eventual LH&S cut over 100 miles (160 km) off the trip, including a similar distance saving Philadelphia to Pittsburgh (via Pitston Landing's canal docks). The first three tunnels of any kind in the US were built in support of the Allegheny Portage Railway, and all of them were converted to railroad tunnels. 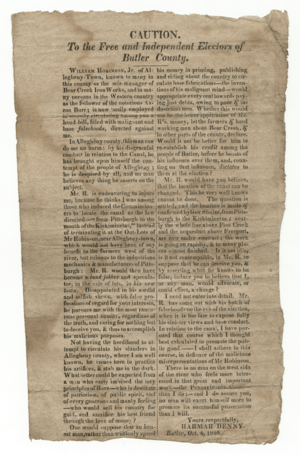 October 4, 1826 letter by Harmar Denny, Representative of Pennsylvania, that discusses William Robinson Jr.'s "disgraceful conduct" in debate over the location of the Pennsylvania Canal's terminal

The canal era began in Pennsylvania in 1797 with the Conewago Canal, which carried riverboats around Conewago Falls on the Susquehanna River near York Haven. Spurred by construction of the Erie Canal (construction between 1817 and 1825) and the perceived competitive advantage it would give New York State in moving people and materials to and from the interior of the continent, Pennsylvanians built hundreds of miles of canals during the early decades of the 19th century. These included the privately funded Lehigh Canal, technically a navigation (1818) improving water transport on the lower Lehigh River (Mauch Chunk to Easton at the confluence with the Delaware via Allentown and Bethlehem) and enabling the first regular reliable supplies of anthracite coal to reach eastern manufactories and two canals built later by Pennsylvania stock companies, the Schuylkill Canal from Philadelphia to Port Carbon and the Union Canal from Reading to Middletown.

By 1834, the Main Line of Public Works, a system of interlocking canals, railways, and inclined planes, was hauling passengers and freight up to 391 miles (629 km) between Philadelphia and Pittsburgh. Though not all in concurrent operation, the total length of the canals built in Pennsylvania eventually reached 1,243 miles (2,000 km).

By about 1850 steam engine technology had advanced to having the ability to produce locomotives with sufficient power to move freight, including bulk goods such as coal and grain, so railroads had already begun displacing canals as the preferred method of long-distance transportation, as they also offered speed. In 1852, the Pennsylvania Railroad (PRR) began offering rail service from Philadelphia to Pittsburgh, and in 1857, it bought the Main Line Canal from the state. In 1859, all canals owned by the commonwealth were sold. The PRR formed the Pennsylvania Canal Company in 1867 and continued to use canals to haul freight. The canal business, however, declined steadily in the last quarter of the century, and most Pennsylvania canals no longer functioned after 1900.

The state funded the following canals in Pennsylvania. For interstate canals, the listed mileage is for the Pennsylvania portion only.

These canals are all connected directly to branches of the Susquehanna River, and most are technically Navigations.

Private entities funded the following canals in Pennsylvania. For interstate canals, the listed mileage is for the Pennsylvania portion only.

Several canal segments or other canal infrastructure in Pennsylvania are listed on the National Register of Historic Places. One complete canal, the Delaware Canal, is the main feature of Delaware Canal State Park (formerly Theodore Roosevelt State Park) between Bristol and Easton. It is continuously intact for its full length of 60 miles (97 km).

Other Pennsylvania canal infrastructure on the National Register includes the following:

All content from Kiddle encyclopedia articles (including the article images and facts) can be freely used under Attribution-ShareAlike license, unless stated otherwise. Cite this article:
Pennsylvania Canal Facts for Kids. Kiddle Encyclopedia.