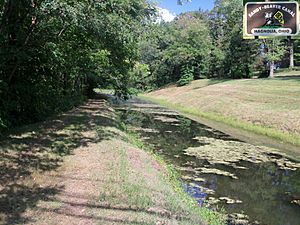 The Sandy and Beaver Canal ran 73 miles (117 km) from the Ohio and Erie Canal at Bolivar, Ohio, to the Ohio River at Glasgow, Pennsylvania. It had 90 locks, was chartered in 1828 and completed in 1848. However, the middle section of the canal had many problems from the beginning and fell into disrepair. The canal ceased to operate in 1852, when the Cold Run Reservoir Dam outside of Lisbon, Ohio failed, ruining a large section of the canal.

Major D.B. Douglas of the United States Military Academy surveyed a route in 1828. This route was 90.5 miles (145.6 km), with seven aqueducts, 100 locks and a 2,700-foot (820 m) tunnel. The west division would rise for 33.5 miles (53.9 km), the middle division would be 14 miles (23 km), with tunnel, at summit elevation, and the east division would fall over 43 miles (69 km). The Douglas plan was rejected, and the Philadelphia Board of Trade decided that the Pennsylvania and Ohio Canal would be a better option to join the canal systems of Ohio to those of Pennsylvania.

Construction progressed until being interrupted by financial difficulties of the Panic of 1837. The number of workmen decreased from 2000 to 200. Little was done for seven years, and the tunnels were finally completed in 1848. Aside from the reservoir collapse in 1852, the Cleveland and Pittsburgh Railroad was built that year, taking business away. Six miles on the west end of the canal were used as a feeder of the Ohio and Erie Canal until 1884, when the aqueduct was lost in a flood.

A company called the “Nimishillen and Sandy Slackwater Navigation” was established to investigate a connector along the Nimishillen Creek from Sandyville, Ohio to Canton, Ohio in 1834–35. It was determined there was not enough water flow along this route to build a canal. A similar stillborn plan called the “Still Fork of Sandy Navigation Company” was incorporated in 1837 by some Carroll County, Ohio men to build a connector from Pekin up the Still Fork to near Carrollton, Ohio.

Only 0.75 miles (1 km) of this privately funded canal lay in Pennsylvania; the rest was in Ohio.

All content from Kiddle encyclopedia articles (including the article images and facts) can be freely used under Attribution-ShareAlike license, unless stated otherwise. Cite this article:
Sandy and Beaver Canal Facts for Kids. Kiddle Encyclopedia.