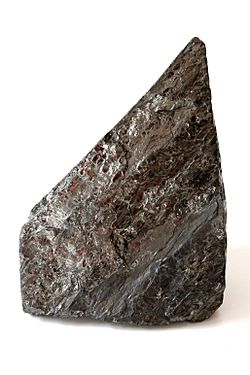 Anthracite, often referred to as hard coal, is a type of dark coloured coal. Anthracite produces the fewest pollutants per unit of heat released, having the highest-heat value, and the lowest sulfur content. At the moment, deposits are largely depleted.

Anthracite is the most metamorphosed type of coal currently known to science.

China does most mining of anthracite. Other producers are Russia, Ukraine, North Korea, South Africa, Vietnam, the United Kingdom, Australia, Canada and the United States (east of the Mississippi River and Pennsylvania). Total production in 2010 was 670 million tons.

All content from Kiddle encyclopedia articles (including the article images and facts) can be freely used under Attribution-ShareAlike license, unless stated otherwise. Cite this article:
Anthracite Facts for Kids. Kiddle Encyclopedia.