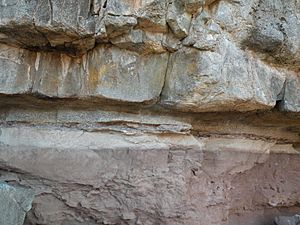 A metamorphic aureole in the Henry Mountains, Utah. The greyish rock on top is the igneous intrusion, consisting of porphyritic granodiorite from the Henry Mountains laccolith, and the pinkish rock on the bottom is the sedimentary country rock, a siltstone. In between, the metamorphosed siltstone is visible as both the dark layer (~5cm thick) and the pale layer below it.

Metamorphism, in geology, is the change of the structure, texture, or composition of rocks. (an aggregation of solid matter composed of one or more of the minerals forming the earth's crust).

The scientific study of rocks is called petrology.

Rocks are commonly divided, according to their origin, into three major classes—Igneous, sedimentary, and metamorphic. They are caused by the effects of heat, deforming pressure, shearing stress, hot/chemically active fluids, or a combination of these. All of these changes occur while the rock remains essentially in the solid state. In theory, rocks are formed when the things surrounding them are in equilibrium with ambient physical conditions. If the conditions are changed by movements in the earth's crust or by igneous activity, metamorphism occurs to reestablish equilibrium and changes the physical character of the rock mass.

All content from Kiddle encyclopedia articles (including the article images and facts) can be freely used under Attribution-ShareAlike license, unless stated otherwise. Cite this article:
Metamorphism Facts for Kids. Kiddle Encyclopedia.