Chalk is a type of limestone. Air and water do not wear chalk away easily, so when chalk is next to the sea, it often makes a large cliff. The "White Cliffs of Dover" in Kent, England are a good example of this. When chalk is near the top of the ground, it often makes chalk hills. Chalk holds water, so these chalk hills have a lot of water in them, and when the weather is very dry, water comes slowly from the chalk. Chalk is mostly formed from the calcareous (CaCO3) skeletons of countless tiny planktonic algae called coccoliths. It was laid down in the Upper Cretaceous period.

Ninety million years ago the chalk downland of Northern Europe was ooze at the bottom of a great sea. Protozoans such as foraminifera lived on the marine debris that showered down from the upper layers of the ocean. Their bodies were made of chalk extracted from the rich sea-water. As they died, so a deep layer built up, and slowly it became consolidated into rock. At a later date the sea-bed became dry land, as earth movements thrust it upward.

Chalk is composed mostly of calcium carbonate with minor amounts of silt and clay. It is normally formed underwater, commonly on the sea bed, then consolidated and compressed during diagenesis into the form commonly seen today. During diagenesis silica accumulates to form chert or flint nodules within the carbonate rock. 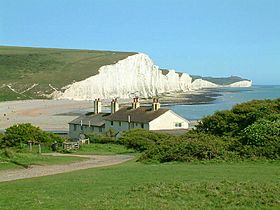 Chalk has long been quarried in England, providing building material and marl for fields. It is also used to make quicklime and slaked lime, mainly used as lime mortar in buildings. In southeast England, Deneholes are a notable example of ancient chalk pits. Such bell pits may also mark the sites of ancient flint mines, where the prime object was to remove flint nodules for stone tool manufacture. The surface remains at Cissbury are one such example, but perhaps the most famous is the extensive complex at Grimes Graves in Norfolk.

The traditional uses of chalk have in some cases been replaced by other substances, although the word "chalk" is often still applied to the replacements.

People in the military say a chalk is when an aeroplane is carrying a special load, especially a group of soldiers in a single aeroplane. "U.S. Army Ranger Chalk Four" was a group that was hurt in the Battle of Mogadishu in Somalia.

All content from Kiddle encyclopedia articles (including the article images and facts) can be freely used under Attribution-ShareAlike license, unless stated otherwise. Cite this article:
Chalk Facts for Kids. Kiddle Encyclopedia.