The Needles facts for kids 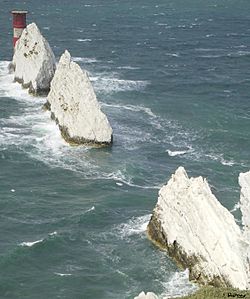 Close-up of the needles 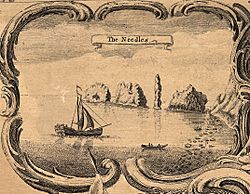 The Needles from Isaac Taylor's "one inch map" of Hampshire, published in 1759, showing Lot's Wife, the needle-shaped pillar that collapsed in a storm in 1764.

The Needles is a row of three distinctive stacks of chalk that rise about 30m out of the sea off the western extremity of the Isle of Wight, United Kingdom, close to Alum Bay, and part of Totland, the westernmost Civil Parish of the Isle of Wight. The Needles Lighthouse stands at the outer, western end of the formation. Built in 1859, it has been automated since 1994.

The formation takes its name from a fourth needle-shaped pillar called Lot's Wife, that collapsed in a storm in 1764. The remaining rocks are not at all needle-like, but the name has stuck.

The Needles were featured on the BBC Two TV programme Seven Natural Wonders (2005) as one of the wonders of Southern England.

The Needles lie just to the southwest of Alum Bay, and are a tourist draw. Scenic boat trips operate from Alum Bay that offer close-up views of the Needles. The rocks and lighthouse have become icons of the Isle of Wight, often photographed by visitors, and are featured on many of the souvenirs sold throughout the island.

The main tourist attractions of the headland itself are the two gun batteries, the experimental rocket testing station, and the four Coastguard cottages owned by the National Trust.

A branch of the National Coastwatch Institution is also based at the Needles, sited near the New Battery and Rocket Testing Site on High Down.

The Needles – Landmark Attraction (previously known as The Needles Pleasure Park) situated at the top of the cliff at Alum Bay is a small amusement park. A Chairlift operates between the park and the beach.

The Needles were a site of a long-standing artillery battery, from the 1860s to 1954, which was eventually decommissioned.

A nearby site on High Down was employed in the testing of rockets for the British ICBM programme. The headland at High Down was used for Black Knight and Black Arrow rocket engine tests from 1956–71. During the peak of activity in the early 1960s some 240 people worked at the complex, while the rockets were built in nearby East Cowes. These rockets were later used to launch the Prospero X-3 satellite. The site is now owned by the National Trust, and is open to the public. Concrete installations remain, but the buildings that were less durable have either been demolished or were torn down by the elements.

In 1982, HRH Prince Charles officially opened the restored Needles Old Battery facility. Underground rocket testing rooms are currently being restored for exhibition. The first phase of restoration was completed in 2004. 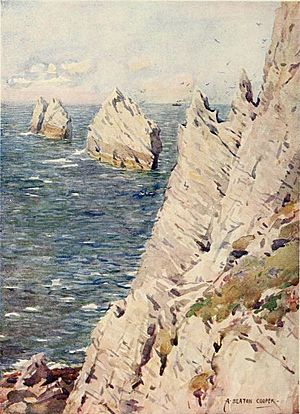 The Needles - From the Beautiful Britain series, The Isle of Wight, by G. E. Mitton.

The batteries are accessible by car, foot, bicycle, and bus. Though there is a paved road up to The Old and The New batteries, access is on foot, from a car park. The battery site becomes dangerous in high winds and is closed to the public in winds above force 8.

In the spring and summer, the Southern Vectis bus company sends open-top buses along a route called "The Needles Tour". This route approaches the Battery along the cliff edge, using a road reserved for bus traffic. The Needles Tour also has stops in Alum Bay, Totland, Colwell Bay, Fort Victoria, Yarmouth, and Freshwater Bay. The Needles Tour buses are the only vehicles allowed on the road from Alum Bay, apart from those owned by National Trust staff or, by prior appointment, vehicles transporting disabled visitors. This is because the single track road's position close to the cliff edge is considered dangerous for multiple car use.

The Isle of Wight Coast Path has its westernmost point at the Coastguard Cottages. 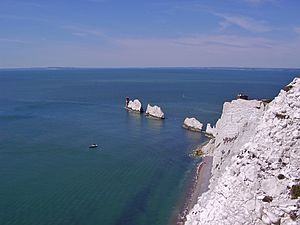 The Needles' pointed shape is a result of their unusual geology. The strata have been so heavily folded during the Alpine Orogeny that the chalk is near vertical. This chalk outcrop runs through the centre of the Island from Culver Cliff in the east to the Needles in the west, and then continues under the sea to the Isle of Purbeck, forming Ballard Cliff (near Swanage), Lulworth Cove and Durdle Door. At Old Harry Rocks (east of Studland and north of Swanage) these strata lines moving from horizontal to near vertical can be seen from the sea.

Just off the end of the Needles formation is the Shingles, a shifting shoal of pebbles just beneath the waves. The Shingles is approximately three miles in length. Many ships have been wrecked on the Shingles.

All content from Kiddle encyclopedia articles (including the article images and facts) can be freely used under Attribution-ShareAlike license, unless stated otherwise. Cite this article:
The Needles Facts for Kids. Kiddle Encyclopedia.