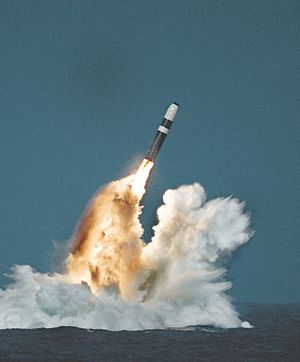 A trident missile, launched from a submarine

ICBM is an acronym. It stands for Intercontinental Ballistic Missile. It is a missile that can travel such distances so it can be used from one continent to another. The missile can then carry a bomb. This can be a conventional or nuclear warhead. Today, most of the time, it will be a nuclear warhead.It is a guided ballistic missile which follows a path and has a range of 5500 km.They are primarily designed for nuclear weapons delivery but can also carry chemical and biological weapons.

All content from Kiddle encyclopedia articles (including the article images and facts) can be freely used under Attribution-ShareAlike license, unless stated otherwise. Cite this article:
Intercontinental ballistic missile Facts for Kids. Kiddle Encyclopedia.