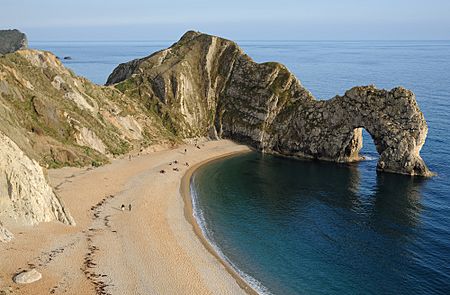 Durdle Door (sometimes written Durdle Dor) is a natural limestone arch on the Jurassic Coast near Lulworth in Dorset, England. It is owned by the Welds, a family who own 12,000 acres (50 km2) in Dorset in the name of the Lulworth Estate. It is open to the public.

The form of the coastline around Durdle Door is controlled by its geology—both by the contrasting hardnesses of the rocks, and by the local patterns of faults and folds. The arch has formed on a concordant coastline where bands of rock run parallel to the shoreline. The rock strata are almost vertical, and the bands of rock are quite narrow. Originally a band of resistant Portland limestone ran along the shore, the same band that appears one mile along the coast forming the narrow entrance to Lulworth Cove. Behind this is a 120-metre (390 ft) band of weaker, easily eroded rocks, and behind this is a stronger and much thicker band of chalk, which forms the Purbeck Hills. These steeply dipping rocks are part of the Lulworth crumple, itself part of the broader Purbeck Monocline, produced by the building of the Alps during the mid-Cenozoic. 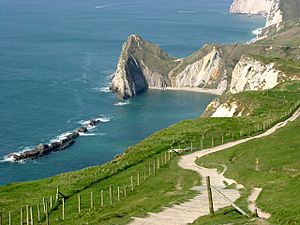 A 'back view' of the Durdle Door promontory from the east, showing the remnants of the more resistant strata in Man O'War Bay

The limestone and chalk are in closer proximity at Durdle Door than at Swanage, 10 miles (16 km) to the east, where the distance is over 2 miles (3 km). Around this part of the coast nearly all of the limestone has been removed by sea erosion, whilst the remainder forms the small headland which includes the arch. Erosion at the western end of the limestone band has resulted in the arch formation. UNESCO teams monitor the condition of both the arch and adjacent beach.

The 120-metre (390 ft) isthmus that joins the limestone to the chalk is made of a 50-metre (160 ft) band of Portland limestone, a narrow and compressed band of Cretaceous Wealden clays and sands, and then narrow bands of greensand and sandstone.

In Man O' War Bay, the small bay immediately east of Durdle Door, the band of Portland and Purbeck limestone has not been entirely eroded away, and is visible above the waves as Man O'War Rocks. Similarly, offshore to the west, the eroded limestone outcrop forms a line of small rocky islets called (from east to west) The Bull, The Blind Cow, The Cow, and The Calf.

As the coastline in this area is generally an eroding landscape, the cliffs are subject to occasional rockfalls and landslides; a particularly large slide occurred just to the east of Durdle Door in April 2013, resulting in destruction of part of the South West Coast Path.

There is a dearth of early written records about the arch, though it has kept a name given to it probably over a thousand years ago. In the late 18th century there is a description of the "magnificent arch of Durdle-rock Door", and early 19th-century maps called it "Duddledoor" and "Durdle" or "Dudde Door". In 1811 the first Ordnance Survey map of the area named it as "Dirdale Door". Durdle is derived from the Old English thirl, meaning to pierce, bore or drill, which in turn derives from thyrel, meaning hole. Similar names in the region include Durlston Bay and Durlston Head further east, where a coastal stack suggests the existence of an earlier arch, and the Thurlestone, an arched rock in the neighbouring county of Devon to the west. The Door part of the name probably maintains its modern meaning, referring to the arched shape of the rock; in the late 19th century there is reference to it being called the "Barn-door", and it is described as being "sufficiently high for a good-sized sailing boat to pass through it." 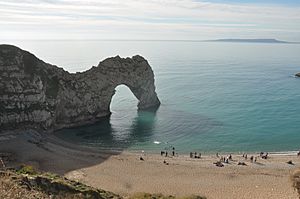 People on the beach show the scale of the arch. The Isle of Portland can be seen on the horizon.

All content from Kiddle encyclopedia articles (including the article images and facts) can be freely used under Attribution-ShareAlike license, unless stated otherwise. Cite this article:
Durdle Door Facts for Kids. Kiddle Encyclopedia.