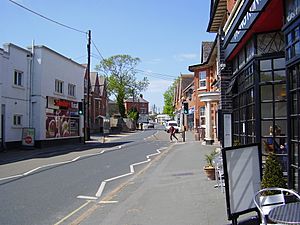 Freshwater is close to steep chalk cliffs. It was the birthplace of physicist Robert Hooke and was the home of Poet Laureate Alfred Lord Tennyson.

Freshwater is famous for its geology and coastal rock formations that have resulted from centuries worth of coastal erosion. The "Arch Rock" was a well-known local landmark that collapsed on 25 October 1992. The neighbouring "Stag Rock" is so named because supposedly a stag leapt to the rock from the cliff to escape during a hunt. Another huge slab fell off the cliff face in 1968, and is now known as the "Mermaid Rock". Immediately behind Mermaid Rock lies a small Sea cave that cuts several metres into the new cliff.

Freshwater's beach is very popular with tourists and locals. It is mostly sandy, but it is also covered in chalk from the nearby cliffs, which is frequently gathered by tourists as souvenirs.

Freshwater features an excellent example of a surviving Victorian Beach hotel, The Albion. The Albion was built around the time Freshwater became well-regarded as a coastal resort and is still popular today. Frequent repair-work and repainting are undertaken on the building's sea-front exterior walls, due to strong storms which often batter rocks, and other debris, against it.

The hills above Freshwater are named after Tennyson. On the nearby Tennyson Down is a Cornish granite cross erected in 1897 in tribute to Tennyson, "by the people of Freshwater, and other friends in England and America." There is also a hill in the area called 'Hooke Hill', named for Robert Hooke.

The Anglican All Saints' Church, Freshwater is one of the oldest churches on the Isle of Wight, and it was listed in the Domesday survey of 1086. Mark Whatson is the current pastor of All Saints, which is in the Anglican Diocese of Portsmouth. A primary school associated with the church is nearby. There is a marble memorial commemorating Tennyson in All Saints Church. Tennyson's wife Emily and other family members are buried in the church cemetery. The church is also the site of a memorial to Tennyson's son, Lionel Tennyson, who died of malaria in 1886. 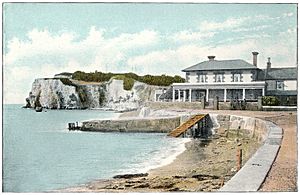 Freshwater Bay, circa 1910. The large building in the foreground is The Albion, a Victorian hotel built in response to an influx in popularity 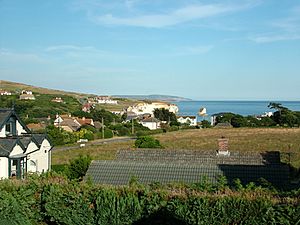 Dimbola Lodge, the home of Julia Margaret Cameron and now a photographic museum, is in the village of Freshwater Bay, which is part of Freshwater. There is also a tearoom and bookstore.

Tennyson's son, Hallam, donated land for a new church in Freshwater Bay. Hallam's wife Audrey suggested that the church be named for St. Agnes. St. Agnes' Church, Freshwater was consecrated on 12 August 1908. It is the only thatched church on the Isle of Wight.

Freshwater was the site of the largest station on the Freshwater, Yarmouth and Newport Railway that operated from 20 July 1889 to 21 September 1953. A supermarket and garden centre now occupies the location of the former station.

Freshwater is near the source of the Western Yar, a river whose estuary runs north to Yarmouth. Freshwater Marshes are a Site of Special Scientific Interest, and a large part of the Marshes is also a Local Nature Reserve called Afton Marshes.

At the western end of Freshwater Bay on a bluff are the remains of Fort Redoubt, also known as Fort Freshwater or Freshwater Redoubt, a Palmerston Fort. Fort Redoubt was built in 1855–1856 to protect Freshwater Bay and was in use until the early 20th century; until the military sold it in 1928. Presently, part of it is a private residence, and other portions are being developed as holiday flats. A doorway carved into the cliff below the fort was the main access to the building from the beach, although most of the iron stairway that formerly gave access has broken up due to the repeated actions of rust and the tide. 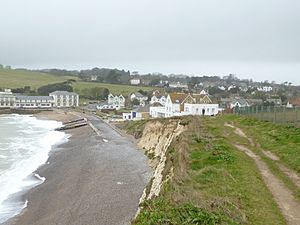 Although being sited near a cove, Freshwater often receives high waves as a result of storms in the English Channel 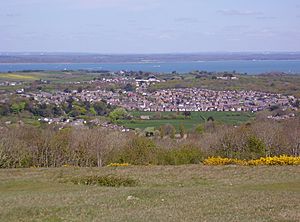 View of Freshwater from Tennyson Down, with the Solent beyond.

Two unusual structures that have been described as ice houses, pottery kilns or crematoria are found on Moons Hill in Freshwater. Robert Walker was the first to excavate these features in the 1890s, and he thought they were evidence of a Phoenician settlement in Freshwater. Chemical analyses suggest that they were most likely lime kilns.

Freshwater Lifeboat is an independent lifesaving organisation based in Freshwater Bay. It operates the Freshwater Bay Lifeboat Station on the promenade along Freshwater Bay and two lifeboats from public donations and profits from shop sales since it is not part of the Royal National Lifeboat Institution.

It hosts the Freshwater and Totland Carnival every year.

Freshwater is the headquarters of the Robert Hooke Society, who have created a walking trail around the area called the "Hooke Trail" to visit sites associated with him. They hold bi-monthly meetings at the Island Planetarium at Fort Victoria, a yearly Memorial Luncheon on 3 March on the date of his death and week-long celebrations of his birthday, 18 July. 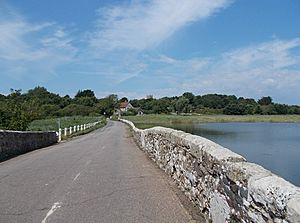 The ancient causeway over the River Yar, leading into Freshwater, looking west, with the tower of the mediaeval All Saints' Church, Freshwater, visible above the trees.

There is evidence of a Roman harbour at the end of the Western Yar. In 530 AD, the Island fell to a combined force of Saxons and Jutes. After the Norman Conquest, Lord of the Island William Fitz Osbern gave the Saxon All Saints' Church and its tithes to the Norman Abbey of Lyre sometime between 1066 and his death in 1071. In 1414 all alien priories were seized by the Crown. In 1623, when King James I gave Freshwater Parish to John Williams, Bishop of Lincoln, Williams then granted Freshwater to St John's College, Cambridge on 24 March 1623.

The Freshwater Parish originally was composed of five farms, known as "tuns": Norton, Sutton, Easton, Weston and Middleton. All of these place names still exist, except for Sutton, which is now called Freshwater Bay (previously Freshwater Gate). The first meeting of the Freshwater Parish Council was on 31 December 1894. 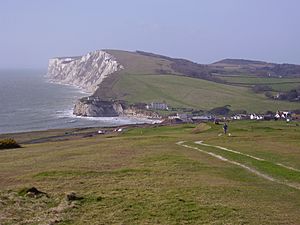 Freshwater Bay, with the lower reaches of the golf course in the foreground and the chalk cliffs of Tennyson Down behind

There are several attractions within the immediate area:

Not all of these attractions are within the formal boundaries of the village.

Freshwater is linked to other parts of the Island by Southern Vectis buses on route 7 and route 12 serving Totland, Yarmouth and Newport as well as intermediate villages. In the Summer, open-top bus "The Needles Tour" and tourist service "Island Coaster" serve Freshwater Bay. Freshwater is on the Isle of Wight Coastal Path.

All content from Kiddle encyclopedia articles (including the article images and facts) can be freely used under Attribution-ShareAlike license, unless stated otherwise. Cite this article:
Freshwater, Isle of Wight Facts for Kids. Kiddle Encyclopedia.