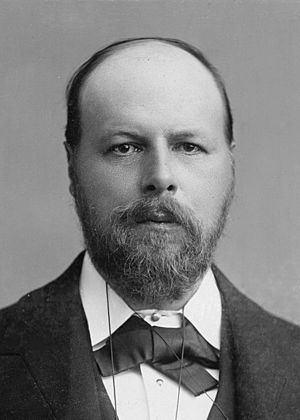 Tennyson was born in Twickenham, Surrey. His parents were Emily (née Sellwood) and Alfred Tennyson. He was twice married, and had three sons (two of which died during World War I). He died at Farringford, Freshwater, Isle of Wight, at the age 76.

All content from Kiddle encyclopedia articles (including the article images and facts) can be freely used under Attribution-ShareAlike license, unless stated otherwise. Cite this article:
Hallam Tennyson, 2nd Baron Tennyson Facts for Kids. Kiddle Encyclopedia.