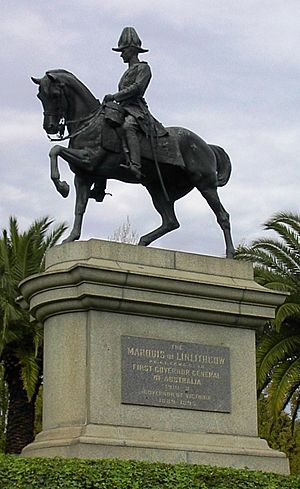 Statue of the Marquess of Linlithgow, Linlithgow Avenue, Melbourne

Hopetoun was born into the Scottish nobility, and succeeded his father as Earl of Hopetoun at the age of 12. He attended Eton College and the Royal Military College, Sandhurst, but opted not to pursue a full-time military career. Hopetoun sat with the Conservative Party in the House of Lords, and became a Lord-in-Waiting in 1885 and Lord High Commissioner to the General Assembly of the Church of Scotland in 1887. He was appointed Governor of Victoria at the age of 29, and had a successful tenure in a time of political and economic instability.

After returning to England in 1895, Hopetoun served in Lord Salisbury's cabinet as Paymaster General and Lord Chamberlain. The announcement of his appointment to the new governor-generalship in July 1900 was met with praise. However, he arrived in Australia ill-informed about the political aspects of federation, and his decision to call on William Lyne to form a caretaker government became known as the "Hopetoun Blunder".

Lyne, who had campaigned against federation, had little support from the political establishment, and Hopetoun was forced to turn to Edmund Barton to serve as Australia's first prime minister. His relationship with Barton once in office was civil, although his interferences in political matters were not well-received.

Hopetoun was popular with the general public, but developed a reputation for flamboyance. His desire for a large expenses allowance was rebuffed by parliament, and he consequently relinquished office in July 1902. He was granted a marquessate upon his return to England, and thereafter withdrew from public life, except for a brief term as Secretary of State for Scotland in 1905. Hopetoun's term as governor-general is generally regarded as a failure, and his successors generally avoided copying his extravagance.

Only Lord Denman held the position at a younger age.

On 18 October 1886 he married Hersey Everleigh-de-Moleyns, daughter of the fourth Baron Ventry. They had four children;

His son Victor, the 2nd Marquess of Linlithgow became the longest-serving Viceroy of India 1936-43, a job he had always wanted. His grandson Lord Glendevon married the daughter of the English novelist W. Somerset Maugham. 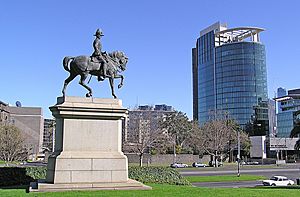 Though he greatly desired appointment to the Viceroyalty of India, Linlithgow was prevented from attaining the position by poor health and adverse political developments, though his son Victor, 2nd Marquess of Linlithgow, would eventually assume this role (after rejecting the post of Australian Governor-General in 1935) from 1936 to 1943. His grandson Lord Glendevon married the daughter of the English novelist W. Somerset Maugham.

His final political appointment was to that of Secretary for Scotland during the last months of the ministry of Arthur Balfour in 1905. However his political career failed to advance, and still plagued by poor health, he died suddenly of pernicious anaemia at Pau, France, on 29 February 1908.

All content from Kiddle encyclopedia articles (including the article images and facts) can be freely used under Attribution-ShareAlike license, unless stated otherwise. Cite this article:
John Hope, 1st Marquess of Linlithgow Facts for Kids. Kiddle Encyclopedia.