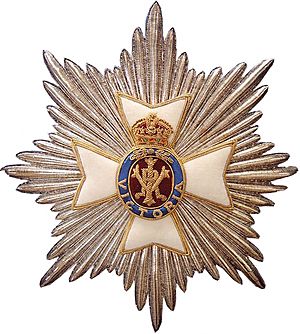 Embroidered version of the GCVO star

The Royal Victorian Order is a British honour. It is given by The Queen, to people who have served her, or the Monarchy personally. Like the Orders of the Garter and Thistle, the Prime Minister does not have a say on who should get the honour.

The Order was created in April 1896, by Queen Victoria, as a way of rewarding personal service to her. Today, people receive their award either privately from The Queen or another member of the Royal Family, or during an investiture.

Often, and on a State Visit, the Queen will invest people in the country visited before returning to the United Kingdom. The British Ambassador and others who have helped the Visit may be rewarded, as can foreigners, and it is often awarded by the Sovereign during official tours overseas.

The first foreigners to get the Order were the Prefect of Alpes Maritimes and the Mayor of Nice, during Queen Victoria's visit to the south of France, in 1896.

The Chapel of the Order is The Queen's Chapel of the Savoy, a 'Royal peculiar', which for historic reasons is in the private possession of the Sovereign, in his or her right as the Duke of Lancaster.

The Savoy Chapel is not very big, so now, the service for those who have been given the award is held in St George's Chapel, Windsor Castle, every four years.

Many members of the Royal Family have been given the award, along with many other recipients, who include servants of The Queen, who have served the Monarchy for many years.

The motto is Victoria.

In order, the ranks are:

The Royal Victorian Medal was set up at the same time as the order. It is for personal service to the Sovereign or the Royal Family, and as a mark of royal esteem.

Although the Medal is related to the Royal Victorian Order, it differs in appearance and in the way it is worn. The Medal is given to civilians and non-commissioned military personnel, often to people who have worked for the Sovereign for a long time.

All content from Kiddle encyclopedia articles (including the article images and facts) can be freely used under Attribution-ShareAlike license, unless stated otherwise. Cite this article:
Royal Victorian Order Facts for Kids. Kiddle Encyclopedia.