Order of the Indian Empire facts for kids 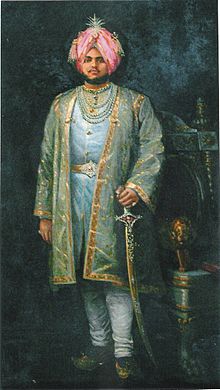 Maharaja Jagatjit Singh of Kapurthala, a Knight Grand Commander of the order.

The Most Eminent Order of the Indian Empire is an order of chivalry founded by Queen Victoria in 1878. The Order includes members of three classes:

No appointments have been made since 1947, the year of Indian independence and the Partition of India. In 2010 the last surviving knight, The Maharaja of Dhrangadhra, died and the order became dormant .

The motto of the Order is Imperatricis auspiciis, (Under the auspices of the Empress), a reference to Queen Victoria, the first Empress of India. The Order is the junior British order of chivalry associated with the Empire of India; the senior one is The Most Exalted Order of the Star of India.

The British founded the Order in 1878 to reward British and "native" officials who served in India. The Order originally had only one class (Companion), but a second class, Knights Commander, was added in 1887. The British authorities intended the Order of the Indian Empire as a less exclusive version of the Order of the Star of India (founded in 1861); consequently, many more appointments were made to the former than to the latter.

Normally the highest grade in British orders is Knight Grand Cross, but Knight Grand Commander was chosen for the two Indian awards because of the Christian symbolism of the cross.

Appointments to both Orders stopped after 14 August 1947. The Orders have never been formally abolished, and Queen Elizabeth II remains the Sovereign of the Orders to this day. Today, there are no living members of the order.

The British Sovereign is the Sovereign of the Order. The Grand Master held the next-most senior rank; the position was held, ex officio, by the Viceroy of India. Members of the first class were known as "Knights Grand Commanders" rather than "Knights Grand Cross" so as not to offend the non-Christian Indians appointed to the Order.

At the time of foundation in 1878 the order had only one class, that of Companion. There could be any number of members. In 1887, the Order was divided into the two classes of Knights Commander (50 at any given time) and Companions (no quota). The following year the class of Knight Grand Commander (25 at any given time) was added; the composition of the other two classes remained the same.

British officials and soldiers were eligible for appointment, as were rulers of Indian Princely States. Generally, the rulers of the more important states were appointed Knights Grand Commanders of the Order of the Star of India, rather than of the Order of the Indian Empire. Women, except the princely rulers, could not be members the Order. Female princely rulers were admitted as "Knights" rather than as "Dames" or "Ladies".

As well, other Asian and Middle Eastern rulers were also appointed.

All content from Kiddle encyclopedia articles (including the article images and facts) can be freely used under Attribution-ShareAlike license, unless stated otherwise. Cite this article:
Order of the Indian Empire Facts for Kids. Kiddle Encyclopedia.