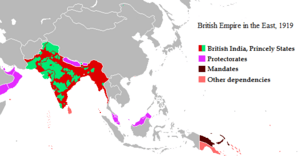 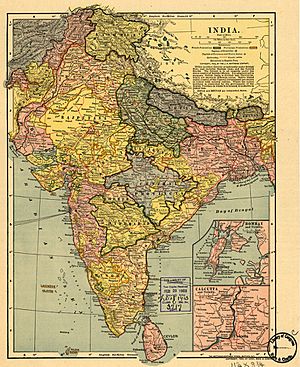 A princely state (also called a native state or Indian state) was a state within the former British Indian Empire where a native Indian sovereign came under subordinate alliance with the British via a treaty. Such treaties allowed for what was termed British Paramountcy as opposed to sovereignty over the native states. The peoples of these native states were officially not considered subjects of the British Indian Empire but rather as subjects of their native monarch. For the purposes of travel the term used on the passports of subjects of Native sovereigns was "British protected person". As according to treaty with the empire the native ruler had surrendered the subject of foreign affairs, such states could not have direct relations with other states without British approval.

From time to time, however, often for the purposes of its own security, the British Indian Empire would interfere in the internal affairs of even the first class states in violation of the treaties made with them. Such interference was met by both public and formal protests buy native rulers and their subjects and was considered as an "encroachment on a native states sovereignty" by the empire.

The rulers of these states held various titles: e.g. raja (a Hindu ruling prince); maharaja (a greater Hindu ruling prince); nawab (a Muslim ruling prince such as the Nawab of Awadh); nizam, the title of the Nizam of Hyderabad. About 118 of the 565 princely states existing in 1947 were considered first class sovereign states and had state governments of their own and only five were large states (Hyderabad (Princely state), Mysore, Kashmir and Jammu, and Baroda). Of these three became part of the dominion of India while the status of Jammu and Kashmir was disputed.

All content from Kiddle encyclopedia articles (including the article images and facts) can be freely used under Attribution-ShareAlike license, unless stated otherwise. Cite this article:
Princely state Facts for Kids. Kiddle Encyclopedia.