Kollam is an old seaport and city on the Laccadive Sea coast of the Indian state of Kerala. The city is on the banks Ashtamudi Lake. Kollam has a strong commercial reputation since the days of the Phoenicians and Romans. Fed by the Chinese trade, it was mentioned by Ibn Battuta in the 14th century as one of the five Indian ports he had seen during the course of his twenty-four year travels.

Kollam is an is a coastal city on the banks of Ashtamudi Lake that took the title God's Own Country. The Ashtamudi Lake lie about 71 kilometres (44 mi) north of the state capital, Thiruvananthapuram. The city hosts the administrative offices of Kollam district and is a prominent trading city for the state. Kollam is one of the least polluted cities in India. 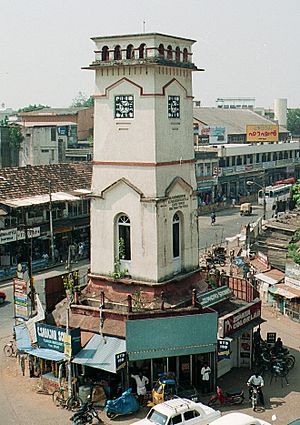 In the 9th Century, on his way to Canton, China, Persian merchant Sulaiman al-Tajir found Kollam to be the only port in India visited by huge Chinese junks. Marco Polo, the Venetian traveller, who was in Chinese service under Kublai Khan in 1275, visited Kollam and other towns on the west coast, in his capacity as a Chinese mandarin.

V. Nagam Aiya in his Travancore State Manual records that in 822 AD two East Syriac bishops Mar Sabor and Mar Proth, settled in Quilon with their followers. Two years later the Malabar Era began (824 AD) and Quilon became the premier city of the Malabar region ahead of Travancore and Cochin. Kollam Port was founded by Mar Sabor at Tangasseri in 825 as an alternative to reopening the inland sea port of Kore-ke-ni Kollam near Backare (Thevalakara), which was also known as Nelcynda and Tyndis to the Romans and Greeks and as Thondi to the Tamils.

Kollam is an ancient trading town – trading with Romans, Chinese, Arabs and other Orientals – mentioned in historical citations dating back to Biblical times and the reign of Solomon, connecting with Red Sea ports of the Arabian Sea. There was also internal trade through the Punalur Pass connecting the ancient town to Tamil Nadu. 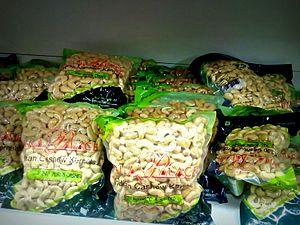 Kollam city is the largest processed cashew exporter in the world

The overland trade in pepper by bullock cart and the trade over the waterways connecting Allepey and Cochin established trade linkages that enabled it to grow into one of the earliest Indian industrial townships. The rail links later established to Tamil Nadu supported still stronger trade links.

Known as the "Cashew Capital of the World", Kollam is noted for its traditional cashew business and is home to more than 600 cashew-processing units. Every year, about 800,000 tonnes of raw cashews are imported into the city for processing and an average of 130,000 tonnes of processed cashews are exported to various countries worldwide.

Kollam's Ashtamudi Lake clam fishery was the first Marine Stewardship Council (MSC) certified fishery in India. The clam fishery supports around 3,000 people involved in the collection, cleaning, processing and trading of clams. Around 90 species of fish and ten species of clams are found in the lake. Kollam is one of many seafood export hubs in India with numerous companies involved in the sector.

The factories processing marine exports and the processing and packaging of cashew nuts extended its trade across the globe. Four major trading centers around Kollam are Kottarakara, Punalur, Paravur and Karunagapally. 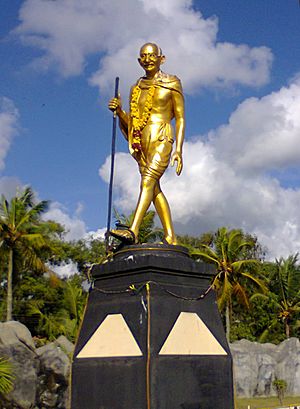 Kollam is the fourth largest city in Kerala and the fifth largest in terms of corporation area. It is known for cashew processing and coir manufacturing. Ashtamudi Lake is considered the southern gateway to the backwaters of Kerala and is a prominent tourist destination at Kollam.

Kollam appeared as Palombe in Mandeville's Travels, where he claimed it contained a Fountain of Youth. During the later stages of the rule of the Chera monarchy in Kerala, Kollam emerged as the focal point of trade and politics. Kollam continues to be a major business and commercial centre in the Southern Kerala.

In 825 CE, the Malayalam calendar, or Kollavarsham, was created in Kollam at meetings held in the city. The present Malayalam calendar is said to have begun with the re-founding of the town, which was rebuilt after its destruction by a fire. The name Kollam is believed to have been derived from the Sanskrit word Kollam, meaning pepper.

All content from Kiddle encyclopedia articles (including the article images and facts) can be freely used under Attribution-ShareAlike license, unless stated otherwise. Cite this article:
Kollam Facts for Kids. Kiddle Encyclopedia.