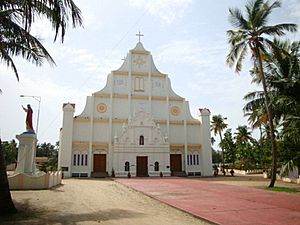 When Portuguese traders settled in Kollam in the early 16th century, their ships passed through the Neenadakara bar, now the site of Neendakara Bridge, part of National Highway 66, which connects the village to Sakthikulangara across Ashtamudi Lake.

The headquarters of the Indo-Norwegian Fisheries Community project, established in 1953, was based in Neendakara until 1961, when the site was handed over to the Government of Kerala.

All content from Kiddle encyclopedia articles (including the article images and facts) can be freely used under Attribution-ShareAlike license, unless stated otherwise. Cite this article:
Neendakara Facts for Kids. Kiddle Encyclopedia.