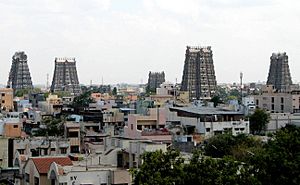 Madurai is a city in Tamil Nadu, India. It was the capital of the earlier Pandyan Kingdom.

Meenakshi Amman Temple, Ayiram Kal Mandabam (Hall of Thousand Pillars) are some of the important tourist places in Madurai.

Madurai is always considered to be a good pilgrim center. Tourists from various part of the country and world are coming to madurai and enjoying a historical excellence.

The main attraction of the city is meenakshi amman temple. Various other tourist and pilgrimage places also there such as Alagar Koil, Thiruparangkundram, Palarmuthir solai (means garden with fruits), Thirumalai naicker Mahal (palace of Naickers), Teppakulam (a square tank almost half a kilometer length as one side length), gandi museum (where we can find blood spotted final dress of Gandiji), etc.

The city is said to be as City of Festivals almost all the days in year is having at least a small festival. The city is also called 'thoonganagaram' which means Non-sleeping city.

Road side shops are very famous in Madurai where all can get good foods in cheaper costs. Jigardhanda, a typical Muslim cool drink is one of the famous drink from madurai. Madurai is very famous for jasmine flowers and Alanganallur located near Madurai is famous for Jallikattu.

All content from Kiddle encyclopedia articles (including the article images and facts) can be freely used under Attribution-ShareAlike license, unless stated otherwise. Cite this article:
Madurai Facts for Kids. Kiddle Encyclopedia.