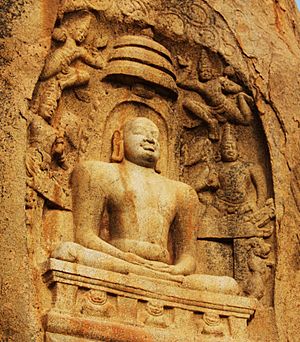 Mahavira (599 BC-527 BC), also known as 'Vardhaman', was 24th Jain Tirthankara (Teaching God). He was born in 599 BC in Bihar state of India. He revived the Jain Dharma with five moral teachings under broad headings of Non-violence(Ahimsa), Truthfulness (Satya), Non-stealing (Asteya), Control of senses including mind (Brahmacharya), and Non-possessiveness (Aparigraha). Mahavira preached that ahimsa (non-injury) is the supreme virtue. He is not the founder of Jain religion. He was preceded by 23 Thirthankaras. However, he was the last Tirthankara in the current time cycle.

All content from Kiddle encyclopedia articles (including the article images and facts) can be freely used under Attribution-ShareAlike license, unless stated otherwise. Cite this article:
Mahavira Facts for Kids. Kiddle Encyclopedia.