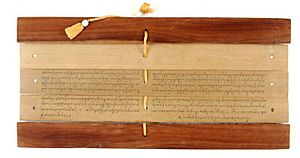 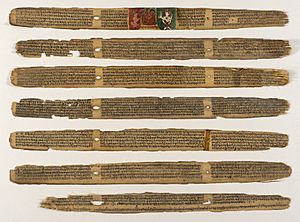 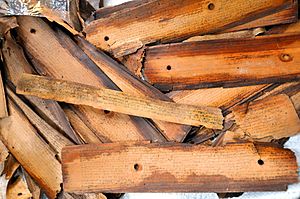 In Southeast Asia, Palm leaves were used as a material to write on. Their use is known in the 5th century BC, but may have started earlier. To prepare them for writing, palm leaves are cooked, dried, and polished. Due to the nature of palm leaves, the manuscripts use "landscape format". These leaves are between 15 centimetres (5.9 in) and 60 centimetres (24 in) wide, but only 3 centimetres (1.2 in) to 12 centimetres (4.7 in) high.

Old manuscripts are prone to putrefaction, and they are commonly consumed by silverfish.

All content from Kiddle encyclopedia articles (including the article images and facts) can be freely used under Attribution-ShareAlike license, unless stated otherwise. Cite this article:
Palm-leaf manuscript Facts for Kids. Kiddle Encyclopedia.