Lepisma saccharina (commonly called the fishmoth, urban silverfish or just the silverfish) is a small, wingless insect. Typically it is between half an inch and one inch (12–25 mm). Its common name comes from the animal's silvery blue color, combined with the fish-like appearance of its movements. The scientific name indicates the silverfish's diet of carbohydrates such as sugar or starches. It belongs to the basal insect order Thysanura, and the species is estimated to have existed for over 300 million years, originating in the Paleozoic Era. Often misidentified as a silverfish is the house centipede, another house-dwelling arthropod that exhibits rapid, fluid movement.

An eyeless species of silverfish, or a close relative, was discovered in January 2006 in caves in Sequoia National Park, California. 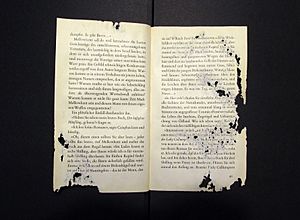 Pages in a book damaged by silverfish that consumed portions of it.

Silverfish consume matter that contains polysaccharides, such as starches and dextrin in adhesives. These include book bindings, carpet, clothing, coffee, dandruff, glue, hair, some paints, paper, photos, plaster, and sugar. They will damage wallpaper in order to consume the paste. Silverfish can also cause damage to tapestries. Other substances they may eat include cotton, dead insects, linen, silk, leftover crumbs, or even their own exuvia (moulted exoskeleton). During famine, a silverfish may even consume leatherware and synthetic fabrics. Silverfish can live for a year or more without eating if water is available.

Silverfish are considered household pests, due to their consumption and destruction of property. However, although they are responsible for the contamination of food and other types of damage, they do not transmit disease. Earwigs, house centipedes, and spiders are known to be predators of silverfish.

All content from Kiddle encyclopedia articles (including the article images and facts) can be freely used under Attribution-ShareAlike license, unless stated otherwise. Cite this article:
Silverfish Facts for Kids. Kiddle Encyclopedia.