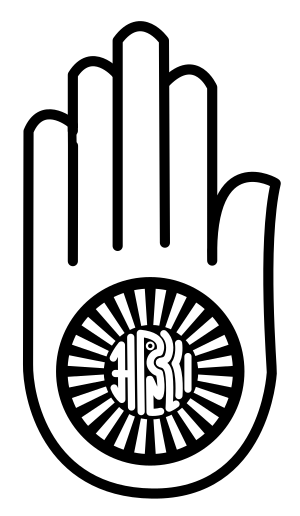 The hand with a wheel on the palm is a symbol for Ahimsa. The word in the middle is "ahimsa"

In twentieth century, Mohandas Karamchand Gandhi and Martin Luther King each followed a path of Ahimsa, though in different ways. They struggled without fighting, while asking for the rights of their followers.

The concept of ahiṃsā forms the base of Buddhism. In Buddhism, the first of the five basic vows (precepts) that are undertaken voluntarily by those who practice, is "I undertake the training rule to abstain from killing". In Buddhism, killing any living being out of passion is considered 'hiṃsā' (injury) and abstaining from such act is 'ahiṃsā' (non-injury or nonviolence).

All content from Kiddle encyclopedia articles (including the article images and facts) can be freely used under Attribution-ShareAlike license, unless stated otherwise. Cite this article:
Ahimsa Facts for Kids. Kiddle Encyclopedia.